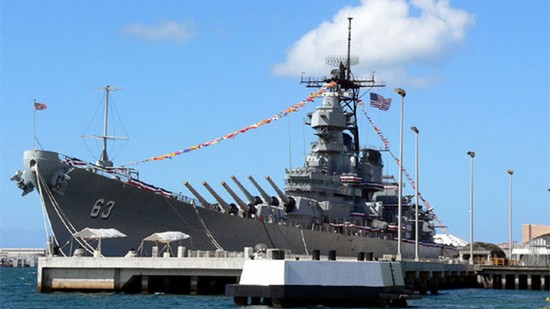 BELOIT, Wis. — U.S. Navy Veteran Bob Jackson is an eyewitness to one of the most influential days in modern history: the Japanese surrender aboard the U.S.S. Missouri in Tokyo Bay on Sept. 2, 1945.

Jackson, 97, of Monroe, says he feels lucky to have been on the iconic battleship that fateful day in 1945, and the way he recalls memories of his naval service, it is as if he was honorably discharged last week.

“I fell through the cracks,” Jackson told the Beloit Daily News. “I was one of the lucky ones who came back with all their fingers and toes. So many things had to fall into place for me to be where I was.”

He joined the Navy in 1942 at 17, meeting up with “Mighty Mo” while she was being built in New York before shipping out to the Pacific front after spending time in technical training.

“I wanted to join the Navy because I didn’t want to sleep in the mud,” Jackson said. “I knew that I was going to have a dry bed or that I would be swimming.”

As SAO-Second Class, Jackson was responsible for repairing optics on the ship, anywhere from binoculars to submarine periscopes and rangefinders. Through his specialized role, he said he was able to have his own sleeping quarters.

“The tradesmen like me had it pretty good,” Jackson said. “We were the lucky ones who had good duty. We needed every man we had.”

About a week ahead of the surrender, Jackson said the crew of 2,700 men were informed that the ship would play host to the Japanese and Allied command staffs for the signing of the official surrender document.

That day, Jackson said the mood of the crew was subdued and serious since such high-ranking commanders would be on deck. All sailors were told to wear their dress uniforms and were assigned places to view the signing ceremony.

Leading up to the Japanese arriving on the ship, Jackson added that he was worried of a possible attack by Japanese forces. That fear was not unfounded, with U.S. Gen. Carl A Spaatz revealing after the war that U.S. planes had been ready with bombs to halt any attack, according to the National Museum of American History.

“We were more excited about getting out of there at the time because we thought there might be a last-minute attack on us,” Jackson said. “Everyone was on edge. We had all the firepower in the world it felt like backing us up just in case.”

From his position on the fourth deck, Jackson said he was able to see both U.S. and Japanese commanders come aboard and leave the ship.

“It was very solemn, Jackson said. “It was all business. We knew once the Japanese were on board that we were well-covered. It didn’t take too long, and they were only on board for about an hour.”

The U.S.S. Missouri stayed in Tokyo Bay for a few days before sailing back to New York.

And how does one spend time following a world war? By taking a train from New York City to Chicago and hitchhiking to Beloit before traveling to Rhinelander to hunt deer.

“They day I got back we went north and spent a week hunting,” he said.

A life-long hunter, Jackson said he shot his first deer at 15 and always processed his own meat, stressing that he and his family always treated the animals they killed with respect and did not waste any meat.

After a month off relaxing, Jackson got a job in construction before working as a traveling salesman for then-Sears Roebuck and Co.

But finding work wasn’t easy as the U.S. economy scaled back wartime manufacturing and production.

“It was tough, just as it is now but in a different way,” Jackson said. “There were so many men coming back that needed jobs and the companies were scaling back everything. It was hard to find work.”

In the decades after his naval service, Jackson said the events of the surrender and his entire time in the service remain vivid in his mind.