Promotion packet photos are out. Name and sex could be next 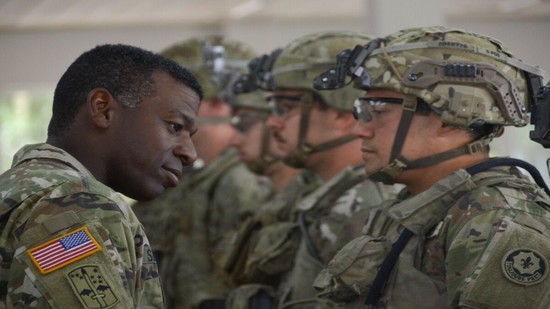 In an effort to level the promotion playing field, the Defense Department is considering stripping out identifying details from packets put together for board consideration.

Following a directive from Defense Secretary Mark Esper, to remove photos from that paperwork, top Pentagon leadership Friday discussed the possibility of further streamlining the information available to promotion boards, to focus on accomplishments and experience.

While senior officials have previously acknowledged that photos can affect a decision about a promotion, Esper is also considering whether names or sex “may trigger unconscious bias,” he said in a town hall livestreamed from the Pentagon briefing room.

The discussion came in response to a video message from a Black Army first sergeant, an immigrant.

“We’re a taking a very holistic look at the way that boards can look at packages, by virtue of merit, into promotion,” Senior Enlisted Advisor to the Chairman Ramon Colon-Lopez said. “I know that the secretary and the chairman can agree that we can do better on those boards.”

On Wednesday, following the Army’s example, Esper released a memo that directed the removal of promotion packet photos, but also ordered a review of ways to encourage diversity and inclusion in the services while rooting out bias.

Also on that lists were reviews of training and the Equal Opportunity program, as well as grooming standards, after some feedback suggested that regulations unfairly burden certain troops.

It was the first set of actions from a DoD team tasked with recommending improvements, with the goal of standing up an independent board of non-military, non-defense officials further down the road.

Beyond that top-down guidance, Esper directly encouraged leadership during the town hall to open up discussions in their units about diversity and inclusion.

He stressed “the importance of having that conversation and the difficulty in initiating it. The importance of giving our folks the lexicon ― the words, the definitions ― to start talking about things like discrimination, racism.”

His guidance came in response to a taped video message from a Black senior airman, who shared a success story in speaking to her chain of command about racial bias in her air wing.

“They are very difficult conversations,” Esper said. “I think once you get in a group and you get over that initial reluctance to have that conversation, people really start talking and you get great insights into their experiences, their perceptions.”

Esper said he had “put out word to leadership” to that end, in addition to holding sensing sessions around the country during his travels to installations coping with changes to their operations during the COVID-19 pandemic.