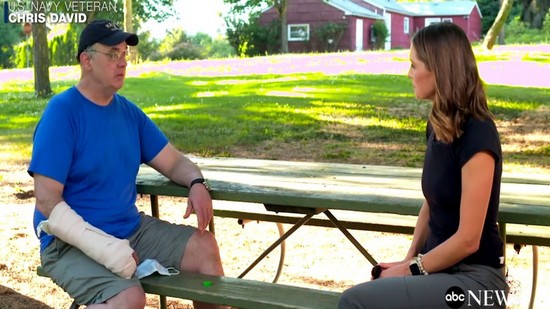 Speaking to ABC News days after he was assaulted by federal agents in Portland, shattering the bones in his right hand, David was a little embarrassed.

"I was an old white guy that got beaten down," he said. "If I had been a Black Veteran that had gotten beaten down, do you think I would have gotten as much attention as I did?"

David, 53, was beaten during protests in Portland on Saturday after he approached federal agents for a conversation. "I wanted to ask them why they were no longer honoring their oath office," he told ABC News.

In a statement to the network, the US Marshals insisted that David posed a threat to federal agents and that force was only used until he was pushed back.

His right hand is now in a cast, fractured in two places.

It was health problems that had kept him from attending earlier Black Lives Matter protests, David said in the interview.

"Then I saw the video of the men in combat fatigues, with no insignia, abducting citizens off the streets of Portland and stuffing them into unmarked vans," he told ABC News. "And I was very concerned about that because if the federal government can do that, anybody can go to the store and buy… used combat fatigues, get an unmarked minivan, and then go off and abduct people off the streets. And we won't know if that's the federal government or just some civilians playing dress-up."

It's not just impostors that are a concern to Oregon's elected officials.

US Sen. Ron Wyden, a Democrat from Oregon, told Business Insider on Tuesday that he fears President Trump will deploy federal agents in other cities.

"You bet that what is happening in my hometown won't stop at my hometown," he said. "Trump has already made clear he wants to expand this gross abuse of power into other cities."

By Wednesday, that came to pass, the Trump administration announced the deployment of an additional 35 federal agents to Albuquerque, New Mexico.