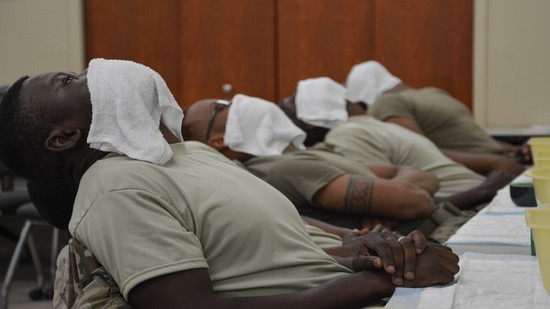 Service members will no longer need a waiver to get laser treatments for severe razor bumps at a civilian facility.

The Defense Department announced Dec. 17 that Tricare will cover claims filed by active-duty personnel who require laser therapy for pseudofolliculitis barbae, or PFB, from a non-military provider.

The change, which is backdated to July 17, 2019, follows the Navy’s termination earlier this year of its permanent no-shave chits for sailors with the condition.

Sailors had been allowed to request a waiver to a military requirement that all personnel be clean-shaven, but Navy leadership decided to scrap the practice, citing two Naval Safety Center reviews that found beard growth can obstruct the seal of face masks, potentially exposing service members to hazardous and lethal conditions.

“We are ensuring that all our sailors will remain safe in the operational, maintenance and training environment that they’re under,” said Rear Adm. Jeff Jablon, director of the military personnel, plans and policy division within the Office of the Chief of Naval Operations.

Under the new Tricare policy, active duty service members with PFB who have not responded to conventional treatment and receive a recommendation from a military dermatologist may be able to receive laser therapy off-base.

PFB is an inflammatory condition caused by ingrown hairs and irritation stemming from the process of shaving. It is more common in men of African and Asian descent, and an estimated 60 percent of African-Americans have the condition.

Several studies estimate the prevalence of PFB among black recruits and soldiers to be between 45 percent and 83 percent.

Roughly 6,000 sailors have sought medical treatment for the condition; data for members of the other military services was not readily available during the holiday break.

While the condition can be treated with topical ointments, chemical peels and steroids, removal of the hair follicle is considered to be among the most effective treatments, but therapies, including waxing and electrolysis, can be painful, expensive and cause unwanted side effects.

Laser treatments can thin and destroy the hair, reducing the chance of recurrence.

The new policy only applies to service members on active duty; Tricare does not cover most laser treatments, including those for hair removal and skin care, for other beneficiaries, including retirees and family members.