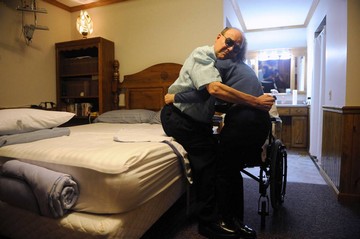 Thousands of Veterans caregivers could see their Veterans Affairs stipends reduced or taken away completely under a series of case reviews planned over the next year to ensure long-time participants still qualify for the benefit.

Veterans Affairs officials said that no families currently in the Program of Comprehensive Assistance for Family Caregivers will see reductions in stipends before fall of next year, and families being removed from the program won’t have the financial support cut off until early 2023.

But the move still means the looming loss of thousands of dollars a month for some families of Veterans with serious, lingering service injuries.

About 33,000 individuals are currently enrolled in the program, which provides support services and monthly stipends to caregivers of Veterans unable to perform basic self-care activities.

Program Executive Director Colleen Richardson said the reviews will cover about 19,800 “legacy” participants, all of whom entered the program before October 2020. Before then, only Veterans who left the ranks after September 2001 were eligible to apply for the program.

Officials expect about one-third of that group — around 6,700 families — to be completely dropped from the program after the review, based on preliminary work. It’s unclear how many more could see reductions in the amount of financial support they receive each month.

In addition, some Veterans could see increases in the amount of payouts they receive, if reviews find they are eligible for more support.

Department officials hope to complete the reviews in the next six months, but Richardson said no stipend reductions will take place before October 2022, to ensure that families are given time to deal with the financial impact of the moves.

Caregivers being dropped from the program will get an additional five months of payments as they transition out, Richardson said.

“And even though they may not qualify for the stipend, they will still qualify for services within the caregiver support program” such as counseling and training offerings, she said.

The reviews will include medical exams and in-home visits (or virtual, if pandemic concerns linger) to determine Veterans’ independence and ongoing assistance needs. Veterans involved will not need to reapply; instead, program officials will contact them about the reassessments.

About 107,000 caregivers applied to the program in the past year, mostly connected to Veterans who served during the Vietnam War or in earlier eras. That group wasn’t eligible for the program until last fall. The approximately 13,000 individuals approved from that group in the last year will not be part of the new reviews.

Richardson said the new move also is not expected to disrupt plans scheduled for next fall to expand the caregiver program to Veterans of any era.

Stipend calculations are based on the severity of Veterans’ injuries and the cost of living in the area where they live.

For example, a caregiver tending to a severely injured Veteran living in the Washington, D.C. area could receive up to $3,100 a month in financial support. Individuals in a less costly area with less severe medical complications could see half that amount.

The new reviews are separate from potential changes linked to a U.S. Court of Appeals for Veterans Claims ruling earlier this year requiring a new appeal process for individuals rejected for the caregiver stipend program. Richardson said officials expect to have additional announcements on that issue in coming days.

More information on the reviews is available on the VA web site.