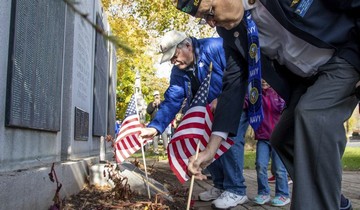 Nearly 6% increase is the biggest in four decades

In another sign that the U.S. military is facing the same economic headwinds as the civilian population, the Defense Department announced Friday that military retirees and survivors will receive a 5.9% cost-of-living boost in pay and survivor benefits.

It’s the largest such bump-up in percentage terms since 1982, reflecting sharply increasing numbers for U.S. inflation overall since the summer.

The Defense Department said the hike, which takes effect on Jan. 1, was calculated based on the official Consumer Price Index for the 12 months ending Sept. 30.

The move comes just two days after Defense Secretary Lloyd Austin announced a temporary 10% boost in the basic housing allowance for service members, justifying the move as a way to meet rising economic challenges brought on by the COVID-19 pandemic.

Pentagon officials say those in the ranks are facing rising levels of food insecurity, extended wait times for housing, drastically reduced housing inventories and sudden, sharp increases in rents and home prices in markets across the country.

“Our men and women in uniform and their families have enough to worry about. Basic necessities, like food and housing, shouldn’t be among them,” Mr. Austin told reporters Wednesday, labeling the economic stress a “readiness issue.”

The Biden White House said the rising prices reflect temporary pressures largely tied to the recovery from the COVID-19 pandemic. But many economists say government spending under Mr. Biden has been a major contributor and that rising prices may not abate for some time to come.