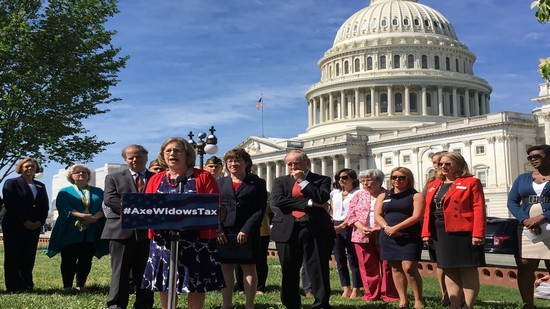 Lawmakers are poised to get rid of the military “widows tax” that cost some families of deceased service members tens of thousands of dollars annually in lost benefits payments because of federal accounting problems.

Advocates hailed the move as a major step forward for military spouses who have faced frustration and financial hardship for years.

“This has been a decades-long battle to provide surviving spouses the benefits they have earned and paid for,” said Ashlynne Haycock, deputy director for policy and legislation at the Tragedy Assistance Program For Survivors. “We are incredibly grateful for all those who have fought so hard and for so long to see this and we look forward to seeing the bill become law in the coming days."

The fix is included in the compromise version of the fiscal 2020 defense authorization bill, released late Monday night. The proposal is expected to be voted on by the full House on Wednesday and the Senate next week.

Addressing the widows tax has been a bipartisan promise of Congress for years, but the expected cost — $5.7 billion over the next decade — has proven to be a barrier in finding a permanent solution.

The problem stems from how the government handles two separate military survivor payouts. The first, the Dependency and Indemnity Compensation program, awards around $15,000 a year to survivors of Veterans or troops who die of service-related causes. There is no cost to troops or families to enroll.

The other, the Survivor Benefit Plan, gives families of military retirees who enroll up to 55 percent of their loved ones' retirement pay after the Veteran dies. The life insurance-type payouts are subsidized by DoD, but require enrollees to pay-in part of their retirement benefit to be eligible.

Individuals who qualify for either SBP money or DIC benefits receive full payouts from the respective programs. But family members who qualify for both are subject to an offset, where for every dollar paid out in DIC their payouts under SBP are reduced by one dollar.

That costs those families up to $1,000 a month in payouts that advocates insist they deserve. Some families have avoided the offset penalty by transferring benefits into their children’s accounts, but that creates other complicated tax issues.

The problem affects about 65,000 military families.

In the annual defense bill, lawmakers inserted a three-year phase-out of the offset. Starting Jan. 1, 2021, families affected by it will receive one-third of their full SBP payout. A year later, that will rise to two-thirds. In 2023, it grows to the full SBP amount.

The bill will also drop the option to transfer those benefits to children after 2023. Families currently using that loophole will be able to move those benefits back to surviving spouses at that time.

“While we still have to get through both chambers and the White House, it is heartening to know Congress maintained their commitment to repeal the widows tax in spite of having to weigh the many competing priorities presented in conference,” said retired Air Force Lt. Gen. Dana Atkins, president of Military Officers Association of America.

The changes do not address the related “kiddie tax,” where families who transferred the military benefits to an underage dependent faced hefty bills this year as a result of the 2017 tax code overhaul. That issue will have to be dealt with in separate legislation.

However, advocates are hopeful that by fixing the offset problem, fewer families will use that financial move in the future, limiting the impact of that problem.

Lawmakers are planning a press conference to celebrate the fix — and reaching a compromise on the broader authorization bill — later this week. The measure has been adopted by Congress in some form for the last 58 years in a row.