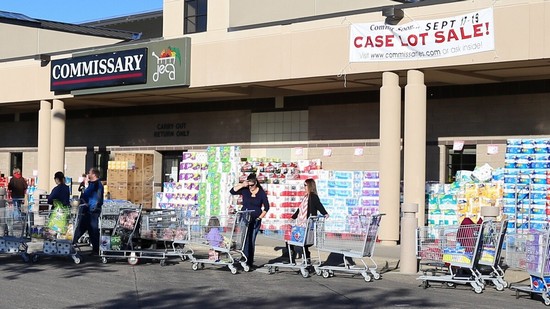 If you’re one of those Veterans who have new shopping benefits on military bases, and wonder if you’ll be able to bring along your spouse .... it depends.

Defense officials maintain that these new shoppers are allowed to bring their spouses and others with them, if they follow screening and security procedures, with certain caveats based on security needs.

By law, and as DoD policy reflects, spouses and dependents aren’t authorized the new benefit, so for example, they can’t purchase anything in commissaries, exchanges, or in morale, welfare and recreation facilities. "However, they may accompany a member of the newly-eligible patron groups [eligible Veterans or caregivers] onto the installation and into authorized facilities,” said DoD spokeswoman Jessica Maxwell, in a response to Military Times’ questions.

But that doesn’t mean it’s happening at every installation. Since the new benefit began on Jan. 1, some Veterans have contacted Military Times asking why their spouses were not allowed to come with them on installations. These Veterans understand that their spouses don’t have the shopping benefit and can’t buy anything. But they questioned why bases are veering from DoD’s consistent statement that spouses are allowed to come on base with them, following required procedures.

The new benefits were authorized by law for all Veterans with VA service-connected disability ratings; Purple Heart recipients; Veterans who are former prisoners of war; and primary family caregivers of eligible Veterans under the VA caregiver program.

According to the Purple Heart and Disabled Veterans Equal Access Act of 2018, these populations are now entitled to access to commissaries, exchanges and certain morale, welfare and recreation facilities on the same basis as military retirees.

Everyone understands the need for additional security measures, said one Veteran whose wife was denied access at Naval Air Station Jacksonville in Florida. This new benefit for about 4.1 million potential new customers took effect just before military officials around the world were implementing heightened security measures as a result of tensions between the U.S. and Iran.

But many question why spouses aren’t even given the opportunity to undergo the credentialing and background checks required for all guests to enter the military installation.

One Veteran told Military Times that the procedure for getting access to Marine Corps Air Station Miramar was easy for him, but he was not allowed to bring his wife into the gate with him. This was on Jan. 2, before the heightened security measures took effect.

Miramar officials referred questions to Marine Corps Installations Command, who didn’t confirm what the policy is at Miramar or where it originated. “We are ensuring we abide by guidelines put forth by DoD, Veterans Affairs and other partnered agencies to properly welcome our new patrons,” said MCIC spokesman Jeku Arce. “We appreciate our new patrons’ patience as our installations adapt to the new policy changes and follow proper physical security procedures to ensure the safety of those who work and live on our installations.

”Please keep in mind that force protection measures can change at any time for various reasons which can impact access to DoD installations."

On Jan. 16, the Veteran contacted Military Times to say he was told the Miramar policy had changed, and his wife would be allowed to come on base with him.

While some bases have told Veterans their restriction is temporary, at least one other base has published a statement saying spouses and other guests don’t have the right to enter the base. “The new legislation does not grant escort or sponsorship privileges,” according to a press release issued by MacDill Air Force Base, Fla, home of U.S. Central Command, U.S. Special Operations Command and dozens of other military tenants. It states that eligible Veterans and caregivers who are granted access to the installation and to base amenities “will not be able to bring family or members or guests with them them” unless those people have base privileges through their own Veteran or military-affiliated status.

Commissary, exchange and MWR officials have no control over security procedures at installation gates. Commissary and exchange officials allow guests to accompany authorized shoppers, and check IDs of those who make purchases.

Here are the current rules for these new customers who want to bring guests with them:

*Stop at the installation’s visitor control center for the required security check, including verification of identity through a document such as REAL-ID compliant driver’s license, passport, etc.; and an on-the-spot criminal history and terrorism checks.

* Guests must remain with their sponsoring Veteran or caregiver at all times, and in retail facilities, but they don’t have access to the benefits, such as making purchases.