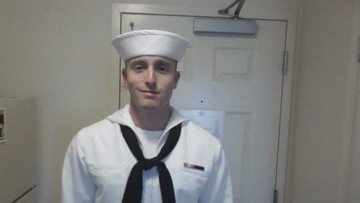 Panama City Beach, FL. – When joggers and hikers pass David Bulger and Justin Moore, they often do a double-take.

The number "22" comes from a Department of Veterans Affairs report from nine years ago that estimated that 22 American Veterans commit suicide every day. (The latest report drops that number to about 17).

Twenty-two miles a day for 22 days comes out to nearly 500 miles of walking for Bulger and Moore, who are hoping to raise awareness about the mental health challenges facing Veterans.

For Bulger, who served in the Navy aboard the USS New York, it's personal. He’s seen the psychological toll of military service firsthand.

"The transition out is never easy, especially for the person who had the perfect career while they were in," said Bulger. "So, 100 percent of Veterans could use help."

At one time, Bulger struggled with his own mental health after leaving the service, so three years ago he started walking in order to bring attention to the issue. He has his own Facebook page called "Barefoot 22" to help raise support.

"Why are the strongest men and women in the strongest fighting force in the world having some of the highest suicide rates?" Bulger asked.

His friend, Moore, isn't a Veteran. But when Bulger shared some of his personal stories and the alarming suicide numbers, he felt compelled to lend a hand.

Mental health is the "issue of our generation," Moore told Fox News. "David asks me every day if I’m coming out to the trails, and I say, ‘Yes, man, I’ll be there for the full 22 days.’"

Since 2008, suicides involving Veterans have topped 6,000 a year, the agency reports.

By comparison, the Department of Defense’s Casualty Report shows about 7,000 American soldiers have given their lives for their country since 2001.

The total number of suicides in the military was up in 2020 compared to 2019 as well. Last year, 377 active-duty service members took their lives, as did 194 in the reserves and 118 in the National Guard.

The causes, according to Miller, vary on a case-by-case basis. For some Veterans, it’s a struggle transitioning to civilian life. For others, PTSD and the gruesome experiences of combat play a large role. Other contributing factors can include issues such as financial woes and substance abuse.

But Miller also sees more nuanced causes. There's a "hero" syndrome, he said, in which some Veterans who return home feel as though they should be able to adjust to life normally and handle any of the challenge’s life throws at them. When that Veteran struggles, he or she often feel like a failure.

"They believe there’s something wrong with them and they need to be X, Y and Z, but they internally feel A, B and C," Miller said. "That can perpetuate some stigma, isolation, and not seeking out help.

"Some of the best things we can do for Veteran mental health are, on the one hand, be extremely grateful of and admiring the service and the skill, while simultaneously leaving room to be human like the rest of us."

Miller emphasized that counseling and support groups work and can help prevent suicide.

"Suicide is preventable, it is not inevitable," he said. "We know with suicide that thoughts, intent, planning …it’s usually a pretty dark, brief period in time. And reaching out during that brief, dark period instead of going it alone saves lives."

The VA currently has programs in place such as the website MakeTheConnection.net, which provides resources for Veterans struggling with mental health issues. There is also the Veteran Crisis Line.

Bulger said there was a time when he contemplated suicide himself. What he has found that works for him is getting back to nature, taking his shoes off and feeling the earth under his feet – literally.

That’s why he and Moore will keep walking through Memorial Day. All 22 miles, all 22 days.

"The concept, I believe, of Memorial Day is to remember those we’ve lost, and not just those in combat but from all the other ways. Including their own hands," said Bulger. "What I believe the people we’re remembering would want us to think about are [those] who still remain, who will continue to experience this."