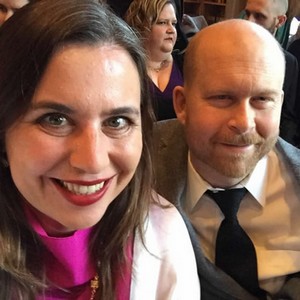 As she became one of the 53 million Americans who provide care for a family member with special needs, she was so burned out she was "already toast."

I got married at 26 and we were both healthy. You just don't think about severe illness coming down the line when you make the vows. But caregiving, in some ways, is coming for us all. People are living longer and living through more severe illnesses.

During the crisis, on my drive from the hospital to home, I would sometimes think, “God, I could just get out of here” because the relentless pressure of every single day and the very painful sight of Brad being so sick added up to a wish for escape. In reality, I didn't want to actually leave my children and abandon everything. But it was a tempting fantasy.

When Brad came home, the biggest shock to me was being expected to do all this medical work with very little training. There's home care that has to be done and there isn’t insurance support for having somebody provide that, so it falls on family members. It’s a cost-saving measure for the health care system.

Hospital discharge instructions can be really complicated and entail a lot of hands-on care that most people don’t envision. The average person, when they think about a loved one becoming ill, is not thinking about personally administering IV medications through a port. You think, “Oh, a nurse will do that.” But you come home and there's no nurse to do that, so you become the nurse.

The training was handled by outside services that came in, so we also suddenly lost contact with the care providers who we knew really well. I was being trained by somebody unfamiliar and it felt very disorienting.

At one point at his worst, Brad’s chances of making it were only about 10%. The fear of loss was so strong and the ongoing strain of being his caregiver was so high that I walled off my feelings. He was so changed from the husband that I knew. I had to stick to what I promised and do my duty because in some ways I couldn't bear to feel all the feelings that would come up if I let them. So at times, I became a little bit robotic out of a feeling of self-protection.

I felt constant pressure to be sunny and upbeat. There's a strong culture of positivity around cancer in particular — “You've got to stay positive for him.” I found that pressure hard to take. I wanted to retain control over my emotions and how I was feeling. It was tough to feel positive when he was as sick as he was.

I found the “You got this” — some of the more glib kind of illness messaging — a little challenging. The saying I disliked the most is “Everything happens for a reason.” Because this did not happen for a reason. This is just terrible luck, at least according to my worldview, and it can be really hard and feel almost blaming to hear “this happened for a reason.” And it's like, well, what's the reason? What did we do to deserve this?

I definitely heard quite a few alternative medicine suggestions — including that Brad should try turmeric or essential oils. I was able to understand they're well-intentioned. People don't understand the severity of things. They've heard about something that might help, so share that almost in panic or a desire to help.

I went on antidepressants when Brad was in the hospital. Drinking alcohol was definitely something I've talked to mental health and health care professionals about and cut back. I'm certainly not drinking as much as I was when he was very ill, but it was something that I started to look at and think, I should probably rein this in before it does become a problem.

If people want to help a caregiver, I really appreciated a text that just said, “I'm just thinking of you. No need to answer if you're overwhelmed.” Offering to bring a meal is definitely a classic. When you're running to Target, texting “Can I pick something up for you?” can be really helpful.

My husband is doing quite a bit better now — he is disabled and has ongoing chronic illness that requires treatment fairly often, but he's in remission from the cancer — and so my role as a caregiver has kind of receded. It's a little bit more of partnership. My burnout has eased considerably.

It is so hard to imagine, until you've gone through it, how overwhelming really severe illness can be. We can try to convey what caregiving or experiencing that kind of family crisis is like, but I don't think it really hits home until it comes to pass.

We need supports to make that sustainable for the family members who support people through those crises. We can do this better for the caregivers of the future who are going to number in the ever-growing millions.