Mapping A Hopeful Future For 5.5 Million Us Veteran and Military Caregivers 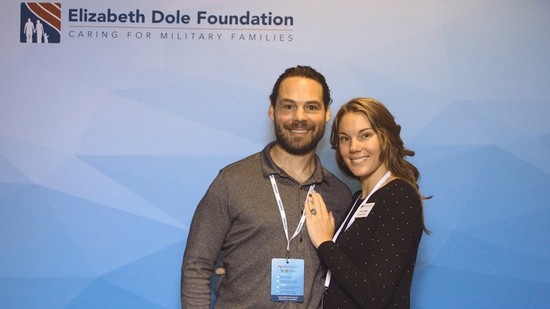 The Scoggins Family Felt Lost Until Resources For Veterans And Caregivers Changed Their Course.

It took Jacqui Scoggins several years of marriage, the loss of her career and an ongoing struggle to keep her family afloat before she realized that she wasn’t just a wife on the verge of divorce; she was a caregiver in need of a lifeline.

“I was at my breaking point,” Jacqui said. “I knew there was something wrong, and I was trying to fix our whole life together.”

“I did Iraq, Afghanistan, Africa, 252 combat missions, 251 pickups and 151 lives saved,” Robert said, sharing his story in Washington, D.C., with Jacqui and service dog, Jefe, by his side. Saving himself, however, proved more difficult. Robert returned from war with invisible wounds, including PTSD and traumatic brain injury, that not only put his own life at risk — but jeopardized his family’s well-being, too.

The couple's experience, while unique to their situation, is far from an anomaly. In fact, according to a 2014 study commissioned by the Elizabeth Dole Foundation, there are no fewer than 5.5 million Veteran and military caregivers like Jacqui across the United States, each on a journey that can feel isolating and overwhelming. Like Jacqui, many family members of Veterans may not even realize that they qualify as caregivers. Too few know what to expect, and far too many experience frustrations with health care systems, as well as a lack of resources, self-care and community to help them along the way.

After his third deployment, Robert went through a divorce with his former wife and a battle for parental rights, coping externally with his post-traumatic stress disorder and suppressing his problems. After meeting Jacqui, Robert continued to self-medicate and exercise poor impulse control. He ultimately attempted suicide before accepting and receiving the help he needed to survive.

Every Veterans Day, Americans celebrate heroes like Robert without realizing the extraordinary cost of their service. At the same time, most people rarely think to celebrate those who go the furthest to save the country’s heroes: caregivers and family members like Jacqui who support them every day. The Elizabeth Dole Foundation, which calls these individuals hidden heroes, is devoted to empowering and recognizing and supporting their influence across the nation.

According to Steve Schwab, CEO of the Elizabeth Dole Foundation, the Foundation-commissioned study that first uncovered a national military caregiving crisis also called for more research. More work needed to be done to understand types of support that caregivers need and the circumstances when they need it most.

“We didn’t know enough about what was happening in the homes of these caregivers; we desperately needed insight into the daily challenges and experiences that were shaping their lives,” Schwab said.

So when Philips volunteered to help map the entire military and Veteran caregiver experience in partnership with the foundation and the U.S. Department of Veterans Affairs, Schwab was ecstatic.

“Before we could create it, we had to identify the most common caregiving gaps,” said Vitor Rocha, Chief Market Leader of Philips North America. “So, our team talked to more than 500 Veterans and their families, advocacy groups, healthcare providers, and many others. We listened to courageous caregivers as they told their stories and pushed us to reimagine what is possible. The result is a roadmap that takes Veterans and caregivers from symptom to diagnosis, to treatment to home care, keeping the Caregiver at the center of the conversation.”

At the fourth national convening of the Elizabeth Dole Foundation, hosted at the Capital Hilton in Washington, the progress made since 2014 was palpable.

“Every caregiver story begins with an individual who raises their hand to serve our country,” founder Sen. Elizabeth Dole said to an audience of caregivers, Veterans, health providers and partners. “It is one of the greatest love stories ever told.”

“My mother became a caregiver when my father was seriously wounded,” he said. “Caring for our heroes is everyone’s business.”

Jacqui has been an Elizabeth Dole Foundation Dole Caregiver Fellow since 2017 and was involved in the development of the Caregiver Experience Map. Originally presented with a linear map, Jacqui’s input helped inform the circular prototype in use today, which she believed better represents her caregiver journey and that of many others.

Robert views the map as the opposite of the downward spiral Veterans often experience but don’t always escape. “(Instead), it’s an expanding circle,” he explained.

According to Schwab, one of the map’s primary functions is to help Veterans and their families prepare for what’s next — emotionally, psychologically, physically, socially and even financially.

“Caregivers and Veterans think a lot about what they need right now,” he said. “Our work with Philips has allowed them to think about tomorrow and the next day and a year down the road.”

Another key function of the map is to provide caregivers and Veterans’ families with effective resources at whatever point they’re at. Ideally, the map will act as a navigational tool from the start.