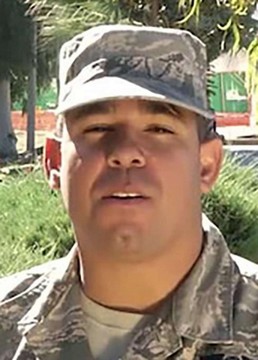 An Air Force combat photographer will lose his retirement benefits at month's end due to a disputed touching incident in a hot tub six years earlier, unless the Congressional Justice for Warriors Caucus can convince the military otherwise.

A court martial and administrative discharge proceeding failed to remove Master Sgt. Jeremy Zier, according to documents reviewed by Just the News, sparking a social media campaign to remove him that included the now-No. 2 at the Air Force.

The month before President Biden nominated Gina Ortiz Jones for undersecretary, the failed congressional candidate tweeted that the administrative result sends the message sexual assault victims are "not valued."

Months earlier, after the court martial, she tweeted that this was not a "sex case" because "Sex is consensual." In a message shared with Just the News, Zier told his military lawyer this was "meant to insinuate that I raped" the woman who accused him.

The 23-year Veteran and Bronze Star recipient has submitted retirement requests 75 times in the past 10 months, to no avail, Gohmert wrote Oct. 13. Because the Air Force subsequently rolled back his service contract, Zier will involuntarily forfeit those benefits Nov. 30.

Neither the Air Force nor JBSA public affairs responded to Just the News queries about the letter. "Unfortunately the letter has not prompted a response from any [Department of Defense] component," said Derrick Miller, military advisor to Gohmert and executive director of the caucus.

St. Mary's University law professor Jeffrey Addicott, who directs the Warrior Defense Project and is assisting Zier, wrote in an email last week they haven't heard back either.

There was a short-lived attempt to ban Zier from JBSA Oct. 27, but that "installation access denial" letter was rescinded after Addicott protested that "it made no sense given he is active duty and not under investigation."

He speculated the command was "salivating to push [Zier] out at the end of this month and too incompetent to know you can't bar an active duty person."

For more than a year Zier has remained at "his off Base home as ordered, receiving pay and benefits with absolutely no work or requirements of any kind," Addicott said. "This is a naked use of raw power clearly designed to achieve a result that the normal legal process [flatly] rejected."

Zier may get a reprieve this week, Addicott told Just the News Monday night, citing conversations with the Office of Staff Judge Advocate at JBSA on resetting his service contract to its original September 2022 end date.

The U.S. military is facing competing pressures from each side of the political aisle regarding the Zier case.

Gohmert's letter said removing him is "designed to achieve a retaliatory result that the normal legal and administrative processes flatly rejected" and would become "an exhibit in our review of reforms needed within the Uniform Code of Military Justice."

Zier was first accused Dec. 7, 2019 — nine days after being "selected for promotion to Chief Master Sergeant," the highest enlisted rank in the Air Force — but it didn't involve the hot tub, according to a case summary provided by Addicott.

Someone not claiming to be a victim "went to investigators with a claim of inappropriate touching allegedly witnessed at a holiday party" that night. "Investigators spent months on a witch hunt putting together a case that now included isolated allegations spanning back 5 years in time."

The court martial happened in August 2020. The jury — three women and one man — found Zier guilty of dereliction of duty in "willfully fail[ing] to maintain professional relationships with subordinate Airmen" by getting "completely nude" in the hot tub with them.

It also found him guilty of "directly" touching "the genitalia and inner thigh" of Ferguson, "with an intent to gratify his sexual desire, without her consent," but not guilty of touching the buttocks of two females a week apart in December.

Gohmert's letter didn't mention the genital touching, characterizing the guilty finding as "touching a leg." Zier phrased it slightly differently. "The final charge sheet said I touched her inner thigh and grazed her genitalia which is why the charge was abusive sexual contact," he wrote in an email.

Ferguson didn't make the genital allegation in her original interview with the Office of Special Investigations, and she later conceded she didn't see his hand touch her genitals, Zier said, providing an excerpt from his appeals package.

"C.F. claimed that Applicant touched her genital area in the presence of at least five other people," the excerpt said. "None saw the touch and none saw or heard any reaction from C.F. which would indicate to him or her that a non-consensual touching was occurring."

Zier provided a photo he said was Ferguson in his home in Turkey in June 2015, two months after the incident. She's smiling and holding a little girl Zier said is his daughter, whom she babysat "on at least two occasions and both of them were after I allegedly touched her."

Her victim impact statement, posted on her personal website, said his alleged behaviors "do not align with ideals of a good father, a good role model or a good leader." (She has since changed her surname.)

Ferguson made further allegations after the verdict, telling the Express-News that Zier followed her out of the hot tub and pulled off her swimsuit top, at which point "everyone else obviously noticed" what was happening.

Addicott's summary, which appears to have informed much of Gohmert's letter, said Ferguson and "other individuals close to her" proceeded with a "slanderous social media campaign" following this verdict.

"These articles and postings contained unsubstantiated claims that never existed in any testimony at the court-martial but served as a means to inflame the passions of readers," it reads. Ferguson opted not to give them "under oath while she was subject to cross-examination."

The Express News mentions a Facebook post where she compares her treatment to that of Army Spc. Vanessa Guillen, who reported sexual harassment shortly before a fellow soldier murdered her. (A subsequent investigation found "no credible evidence" her killer had sexually harassed her.)

In response to his first attempt to retire, days after the verdict, Zier was told "administrative codes" made him ineligible and that he would face another proceeding, according to Gohmert's letter.

Zier then submitted a request for retirement in lieu of (RILO) facing the Administrative Discharge Board, which was ignored until five months after he faced the board. "To our knowledge, this RILO request is still pending," the congressman wrote.

Zier's request to delay that hearing, on account of his military lawyer's unavailability for the scheduled date, was denied, forcing Zier to sever his attorney-client relationship of nearly two years. The board's legal advisor later deemed this denial caused "constitutional harm."

Reviewing the same evidence before the court martial jury, the board determined Zier met all six retention criteria, which would prevent his removal and loss of retirement benefits. In a partial Dec. 10 transcript provided to Just the News, the board qualified the earlier findings.

Zier's conduct was "a departure" from his usual behavior, "not under all circumstances likely to recur," and did not involve any penetration, "however slight, of the vulva ... with an intent to abuse, humiliate, harass or degrade" or cause sexual gratification. It also wasn't the result of "an abuse of rank, grade, authority, or position."

Ferguson expressed disgust at this second failure to remove Zier to the Express-News, which emphasized the first proceeding ordered him to register as a sex offender but failed to cite the board's description of the sexual contact.

The second proceeding sparked an "additional onslaught of slanderous media attention," Addicott's summary said, and Brig. Gen. Caroline Miller, the convening authority for the court martial, made an "unprecedented" recommendation to Secy. Kendall to overturn the results.

Miller is violating "limitations on discharge" rules, and her recommendation would violate Zier's civil and other statutory rights as a federal employee, Gohmert's letter said.

"MSgt. Zier regrets attending the trip with his coworkers, and putting himself in a compromising position, but the jury panel and administrative discharge board both agreed that this one mistake should not cancel his entire career," the congressman wrote.