The first independent air force — 100 years before the Space Force

The first independent air force — 100 years before the Space Force 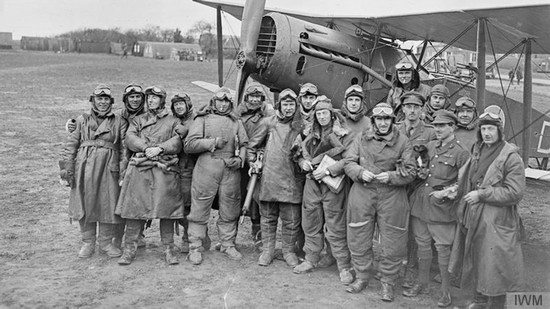 A century before President Trump announced the creation of a U.S. Space Force, another new military force was leaving the Earth. The Royal Air Force came into existence 100 years ago, on what might seem an inauspicious date, April Fool's Day, 1918.

On that morning, my grandfather, John Everard Gurdon, flew on the RAF's first ever patrol, hunting Luftwaffe aircraft in the skies over northern France. When he returned to his base at Vert-Galant, his fellow men of the 22 Squadron gathered in front of Gurdon's Bristol F.2b fighter for a memorial photograph. The result (above) is in the Imperial War Museum now, and copies are all over the place.

Gurdon turned out to be good at this work. He went on to become one of the air aces of World War I, shooting down 28 German aircraft and winning the Distinguished Flying Cross. (Fighter flying became a short family tradition, for my father, Philip Gurdon, flew Spitfires in World War II, a fact that used occasionally to make complete strangers go gaga with admiration.)

But back to 1918 and today. The RAF had previously been the Royal Flying Corps, part of the British Army. But as aircraft became more sophisticated, and control of the skies became more and more important over the battlefield, an independent force equal to the army and navy was a logical step. Details of America's Space Force can be debated at another time, but the events of 100 years ago in northern Europe are a persuasive example of how military forces must adjust to new technology to ensure national security.

The proximate occasion of my writing this post today is not, however, Trump's decision to create a Space Force. It is, rather, the fact that John Gurdon's first and most successful book, Over and Above, is back in print 99 years after it was first published in 1919, and is now on sale in the U.S. (Grub Street, 182 pages, $16). It is a lightly fictionalized account of the author's four or five months of fighting. The style is typical of the boys' adventure genre of those days, with lots of boarding school slang and bravado.

But the scenes are also harrowing when you realize they were not really fiction at all. Gurdon's friends were shot down in flames, fell from their aircraft during dog fights, and suffered heavily from post-traumatic stress, as Gurdon did. On one occasion, a bullet shot through his windscreen at face height and smashed his arm; fortunately, he was at that moment leaning down to free a rudder pedal that had jammed. In August 1918, exploding anti-aircraft fire from the ground concussed Gurdon, and it ended his war. He was sent back to England, and he put down his experiences in Over and Above.

I remember vaguely that, as a boy, I heard an account of Gurdon shooting down an observation balloon. The anecdote had not greatly impressed me; a vast dirigible seemed both easy to hit and defenseless when in the machine gun sights of an incoming fighter. But in Over and Above, the drama of that incident, its danger, and its almost mad fighting fury come alive, and I look back now amazed at what men of action will do, and also at my own juvenile insouciance.

So, this is a shameless plug for the book, and to be clear, it won't earn me a penny.