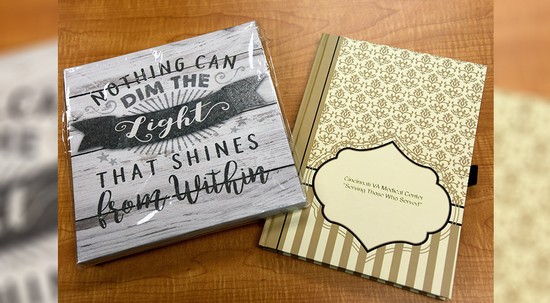 Some participate via video telehealth

“Facilitating these groups is such a humbling and inspiring opportunity for a therapist,” Eason said. “It is a privilege to be in the room with them and witness the precious secret they expose the moment they walk in. These Veterans are absolutely determined to process this life-changing and debilitating trauma and they come to trust each other enough to do it as a shared experience.”

One new feature that has been added to the group is part of VHA’s modernization plan and the MISSION Act to improve access to care. Cincinnati VA’s Courage Group is using VA Video Connect, which allows Veterans to attend virtually through private encrypted video TeleHealth services from almost any mobile device or computer.

Several of the Veterans who participated in a recent Courage Group chose to access their healthcare using VA Video Connect, joining in from where they were located while others chose to attend in person at the Cincinnati VAMC.

“I observed the relief they felt, finally being able to say out loud after so many years what happened and to be believed by other Veterans who had been through the same trauma,” one of the co-facilitators said. “As they give feedback to each other, you hear their sincerity and understanding. They are able to encourage each other like none of us could ever do.”

“It was liberating,” said one male Veteran who attended the group. “I had been confined, imprisoned all these years. Just stepping in the room on the first day, I wasn’t undercover anymore. To have this level of freedom was like being able to exhale. I stand no longer ashamed and no longer disconnected from the mental state of being a man.”

Eason added that she, “couldn’t express enough gratitude, and more importantly, their gratitude for these gifts provided.”

One of the donations was a prayer shawl from the Florence United Methodist Church.

“When you touch the prayer blanket, you can feel the prayers in your hands,” an Air Force Veteran said. “You knew it was made with love. People will find comfort in the blankets and they know it’s blessed. My plan for the blanket is to pray with it. I know they must have spent so much time making them with us in mind. It’s a great comfort. I never had one like that before. I love it!”

“When going through what is called MST, you feel so alone in life and you question humanity and your self-worth,” a male Marine Corps and Navy combat Veteran said. “When people and an organization such as Voluntary Services take the time and attention to console us with gifts, it means the world to all of us. Thank you for your support and I hope that it continues to fulfill its purpose with other survivors.”