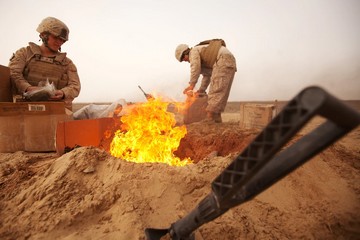 Amid increasing calls for action from Congress and health care advocates, Veterans Affairs leaders on Thursday announced plans to consider adding respiratory illnesses to the list of conditions presumed caused by exposure to military burn pits in Iraq, Afghanistan and other overseas combat locations in recent decades.

The move is a significant albeit preliminary step towards granting new disability payouts and medical benefits for millions of veterans who served in the recent wars, only to return with a host of rare illnesses believed connected to toxic smoke at overseas bases. VA officials don’t have estimates on how much veterans could get in payouts and how much the changes could cost, or even when the work could be complete.

The link between burn pits — used to dispose of excess equipment, human waste and a host of other toxic materials — and serious medical conditions has been widely assumed for years, but not conclusively linked to a specific set of health problems.

About 250,000 veterans have signed up for VA’s Airborne Hazards and Open Burn Pit Registry, designed to track illnesses related to burn pit exposure and ease access to Veterans benefits. But advocates have complained that tool is limited, and the actual number of veterans suffering from burn pit conditions is likely several times that figure.

They’ve also pushed for more liberal granting of disability claims connected to burn pits, noting that insufficient monitoring of the smoke has led to numerous questions about which troops were exposed and poisoned.

Earlier this year, VA Secretary Denis McDonough ordered an internal review into the issue, promising to speed up work on the already decade-old problem.

On Thursday, in a press conference with reporters, he promised that officials are “attacking this issue with urgency” and said it has been a frequent topic of conversation with White House officials.

“It breaks all of our hearts that we have veterans who suffer because of the service they carried out on our behalf,” he said. “It makes me particularly saddened to know we have veterans with terminal diagnosis. We are going to spare nothing to generate answers for them.”

A day earlier, at a press conference on Capitol Hill, Veterans advocates praised recent congressional efforts to address the issue but also acknowledged fatalism about the slow pace of reaction to numerous deaths and serious illnesses over the last 20 years.

“More than 8 in 10 veterans who served in Iraq and Afghanistan say they were exposed to burn pits, and more than 80 percent of those say they’re suffering some health effects from that today,” said Tom Porter, executive vice president of government affairs at Iraq and Afghanistan Veterans of America. “We have to do this, and we have to do it now.”

McDonough did not offer a timeline for when veterans might start seeing new benefits from the move announced Thursday. He promised to “respect the rulemaking process,” which can take several years in some cases.

Congress may not wait that long.

Officials from the House Veterans’ Affairs Committee on Wednesday unveiled plans to make 23 respiratory conditions and rare cancers contracted by Iraq and Afghanistan veterans automatically eligible for disability benefits, and expect to advance the legislation next month.

Senate Veterans Affairs Committee members later in the day unanimously advanced a similar plan with fewer presumptive conditions but a similar approach to granting wider benefits access to all veterans who served near burn pits. Chairman Jon Tester, D-Mont., has said he hopes the two chambers can pass a final compromise plan by the end of the year.

If they do, the VA work may form the procedural backbone for implementing those changes. VA’s announcement noted that the conditions being reviewed “may include asthma, sinusitis, and rhinitis” and will cover “military service in Southwest Asia, Afghanistan and Uzbekistan.”

Officials also pledged to engage veterans advocates in coming months on how to shape the new benefits rules.

“This is the beginning of this effort,” McDonough said. “We will continue to work aggressively at identifying the available science … to make sure we’re getting all we can.”