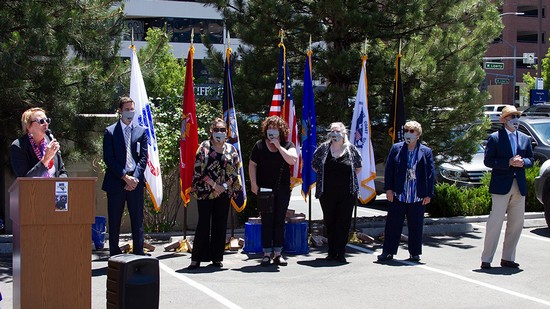 Veterans can endure many hardships when it comes time to transition back into civilian life. Often, service members use alcohol to support traditions or fill voids. Some find themselves addicted to legal and illegal substances. Some wind up on the wrong side of the law. That’s where Courts Assisting Military Offenders-Reno (CAMO-RNO) steps in.

CAMO-RNO, known as Veterans Treatment Court, is a 12- to 18-month treatment option for high risk/high need Veteran offenders. The program models other courts that serve Veterans who struggle with substance use and/or mental health issues.

The road to CAMO-RNO begins with a question. The judge asks individuals who police accuse of a misdemeanor crime if they are Veterans. If they answer yes, the judge asks them if they would like to apply for CAMO-RNO.

The court submits their case for approval to a multidisciplinary team of professionals. The team addresses the criminal conduct and ability to treat the existing behavioral health problems.

If approved, the team asks the Veteran to appear before the Honorable Judge Shelly O’Neill. O’Neill has a reputation for being compassionate and fair, yet firm. Her approach resonates well for Veterans who spent years in an environment that expected adherence to standards and demanded accountability when failing to meet them.

O’Neil’s team includes a judicial coordinator who holds everything together. Also, the team has a prosecutor who treats each Veteran with the utmost respect and a marshal known to shed a tear or two as a Veteran graduates from the program.

Program requirements include weekly — sometimes daily — appointments with therapists and counselors. It also may include self-help appointments, such as with Alcoholics or Narcotics Anonymous. It can prove a bit overwhelming for some.

Praised Veterans for having faith in themselves

On June 16, 2020, nine Veterans stood single file in a downtown Reno parking lot. They were surrounded by their closest peers — all socially distanced — as O’Neill conducted the second graduation ceremony from CAMO-RNO.

“First, I would like to thank VA Sierra Nevada Health Care System director Lisa Howard and her staff,” she said. “The VA hospital and its staff are vital partners in the success of our treatment court.”

The judge spoke directly to the graduating Veterans. She praised them for overcoming adversity and having enough faith in themselves and the program to make it to graduation day. Each Veteran accepted a plaque and a specially designed challenge coin. They spoke to the crowd, sharing their personal struggles and their takeaways from this experience.

Each Veteran’s road to Veterans Treatment Court is different, but most of them share the same result: gaining their life back. Some regained families. Others acquired a new one along the path to sobriety. Regardless, all said the court saved their lives and they would always consider the team family.

One graduating Veteran will attend a local university to earn a degree in nursing, adding that because of the treatment and the caring of the court team, the Veteran would teach a child to grow up respecting law enforcement.

That was when O’Neill’s marshal teared up.

O’Neill reminded each graduate that the crimes that had landed them before Veterans Treatment Court over a year ago were now expunged and their records sealed. They now had a clean slate, a true second chance.