Caring about what Veterans care about: The 2021 Best for Vets Employers 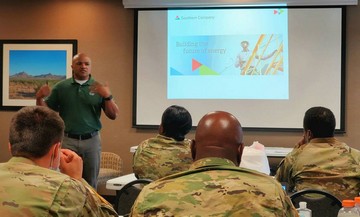 Military Times “Best for Vets: Employers” rankings for 2021 has a different look this year, with more emphasis on the practices that Veterans say make civilian workplaces attractive to their talents and needs.

But the rankings still contain many of the same familiar names of companies focused on recruiting, retaining and promoting Veterans within their operations.

More than 160 employers participated in the 2021 survey, the most prominent annual public rankings of its kind. Each year the rankings provide a snapshot of different employment policies and services that companies provide to America’s Veterans, and highlight firms that Veteran job seekers should target.

The full list of this year’s Best for Vets: Employers rankings is available here.

This year’s list was compiled in partnership with the Fors Marsh Group, a research firm specializing in the Veterans and the military community. Officials there tweaked findings from previous years to better emphasize “areas that are of greatest importance to the Veteran and Veteran-connected community when looking for an employer.”

That included recruiting practices aimed at current military members and Veterans, retention and support programs, and a higher emphasis on employers who provide assistance and flexibility for individuals in the Guard and reserves.

“We had conducted focus groups with subject matter experts and with subscribers of Military Times,” said Tina Kurian, senior researcher for the Fors Marsh Group. “So they ordered which topics were most relevant for organizations to be the best for Veterans.”

The result, said group Director of Customer Experience Research Nicole Tongo, is a list of firms “that care about the things that Veterans care about, and good companies for them to explore if they are looking for a job.”

That corporate connection with Veterans and service members starts with how companies bring them into the workplace.

Although each firm has different strategies and operations for recruiting Veterans, several of the top employers on the ranking said they rely heavily on transition programs through the Defense Department and U.S. Chamber of Commerce’s Hiring Our Heroes initiative, because they provide more time for the difficult shift from military life to the civilian workforce.

“It has been a phenomenal approach for us,” said Jeremy Foshee, military recruiting manager at Southern Company, an energy utility firm which landed atop the Best for Vets rankings this year.

“It’s like an internship program. If the military command can give us a candidate for three months, we can start teaching them all of the areas of the energy business that they need even before they get hired, and see where the best places are to insert their talents.”

The Hire Vets Now program places military candidates into civilian jobs as early as 18 months before their separation from the ranks, giving them significant time to learn about their chosen industry and what is needed to succeed in the field.

“It basically is a working interview,” Foshee said. His firm has working partnerships with 47 military installations, which he says creates a strong link between the military and civilian worlds.

Charles Miles, director of Military and College Employment Programs at PenFed Credit Union, said his firm has seen similar success relying on those programs. PenFed was among the top non-profits on this year’s rankings.

But the company has also found over the years that successful recruiting requires work to ensure leaders recognize Veterans’ talent when they send over a resume.

“Making sure recruiters and hiring managers understand the military community and the skills [Veterans and service members] bring to companies is a difficult problem to solve,” he said. “One way we’ve done it is to focus on working with our hiring managers who are from the military community, because they better understand how Veterans’ experience relates to their jobs.”

The ongoing coronavirus pandemic has presented some challenges to that outreach, as in-person recruiting fairs have been curtailed and shuttered.

“We did have to shift a lot online,” said Meg Hendricks, head of Military and Veteran Affairs for the corporate citizenship team at Fiserv, another top company on the list. “But as a result, our outreach may have gotten even better. It has allowed us to bring in more community partners and find more ways to connect to Veterans.”

Another factor that received extra attention in this year’s rankings was companies’ retention efforts. Past studies have indicated as many as half of all service members will leave their first post-military job within a year, creating significant stress for both their personal situation and the companies they leave.

To counter that, numerous firms on this year’s list have emphasized their internal support networks as a way not just to connect Veterans with each other, but with other members of the company as well.

“We have 41 chapters with more than 14,000 members in our Veterans employee network, and more than half aren’t Veterans,” said Jeff Cathey, head of Military and Veterans Affairs for Bank of America, a top-five company in the rankings.

Officials at EY, another top-five firm in the rankings, recently shifted their support network from a single, centralized program to “regional centers of excellence” with more control by local officials and more links to local communities.

This past summer, several top firms on the rankings list reacted to the military withdrawal from Afghanistan with additional outreach to their Veteran employees, to emphasize available support resources and the empathy co-workers had with the complex emotions they might be feeling.

At the defense contracting firm ManTech, another top performer in the rankings, the retention efforts also include support for individuals still serving in the National Guard and reserves.

Omari Faulkner, a director at the firm and an eight-year Navy reservist, said that includes helping out individuals called to duty with benefits and scheduling issues, and assuring them the company values that service. He said numerous employees were activated over the last two years, including numerous missions related to pandemic support efforts.

“We want to be as supportive as we can in their decision to serve the country,” he said. “And when people see that, it gives them more confidence and energy in who we are as a company.”

All of the firms interviewed about the rankings said their workplace is improved by the experience and viewpoints of their co-workers with military experience.

But Sheriff Scott Jenkins, of the Culpeper County Sheriff’s Office in Virginia, said those benefits aren’t always the ones that people assume. The office was the top ranked government agency in the 2021 Best for Vets rankings.

“Veterans have solid training in tactics and firearms and the skills you would expect would be good for our work,” he said. “But they bring so much more.

“The ability to multitask is underrated. They have to assess a situation, communicate on the radio, sometimes while driving or doing other tasks. And we’re not making widgets in a factory here. Our guys are faced with life or death decisions, and they need to be able to balance all of it. The Veterans come in ready for that.”

Foshee said at Southern Company, officials are specifically looking at Veterans for open leadership roles, given their past military experience in taking charge of groups or individuals or specific tasks. Caterino said EY has seen the same benefits.

“They’ve operated in high-stress situations, they have a global mindset,” he said. “They’re able to integrate and take on challenges and really demonstrate critical thinking. When we get these Veterans into our teams, they excel.”