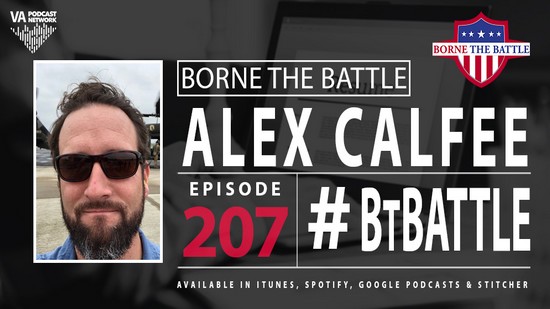 This week’s episode of Borne the Battle features Marine Corps Veteran Alex Calfree, the co-founder of OpLign, a website that uses personal profiles of job seekers to connect them to employers and open up new career paths. Unlike most job-hunting websites which use keyword searches to connect job-seekers to employers, OpLign attributes its success to artificial intelligence that matches a user’s complete profile to the employment opportunities that will allow them to succeed.

After a few years of college, Calfree enlisted in the Marine Corps as an infantryman. He traveled between many different units before becoming a reconnaissance Marine, a job he described as “very cerebral” due to the demanding and required navigation and communication skills.

After transitioning out of the military, Calfree earned an undergraduate degree and Master of Business Administration from Ohio State University with assistance from other Veterans and military members on campus.

In 2017, Calfree co-founded OpLign, an artificial intelligence-powered software application that connects job seekers to employers through a personal profile of education, experience, and skills. Calfree claims that OpLign’s “two-way mechanism of exchange” avoids the pitfalls of a static system of job postings and resumes.

According to Calfree, OpLign aims to work with companies that are Veteran-friendly. Many Veterans transitioning out of the military face challenges in the civilian job market due to their lack of experience, especially during the current employment crisis during the COVID-19 pandemic. Calfree hopes that OpLign can help those Veterans find opportunities and employment by showing employers how much value Veterans have to offer.