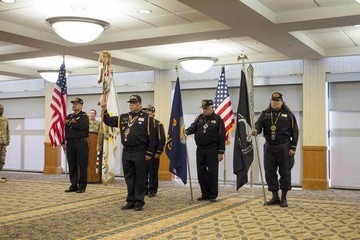 A bill sponsored by a Marine Veteran in Congress could bring Department of Veterans Affairs benefits closer to Native American Veterans at Tribal Colleges and Universities, or TCUs.

The Native VetSuccess at Tribal Colleges and Universities Pilot Program Act , H.R. 2878, passed the House and was referred to the Senate Veterans Affairs Committee on May 19. The bill would increase funding for the Veteran Technology Education Course, or VET TEC, program; bolster student Veteran housing benefits; and enable partnerships between the VA and nonprofit organizations, states, tribes and localities to fight Veteran homelessness.

"H.R. 2878 helps us keep our promise to Native Veterans, a group that has fought for this country in every war since the American Revolution," Gallego, a Marine Corps combat Veteran and member of the House Veterans Affairs Committee, said in a statement after the bill passed that chamber. "I am proud to have worked across the aisle to assemble this legislative package to help improve access to economic and educational opportunities for Veteran communities. I look forward to working with my colleagues in the Senate to get it signed into law."

Approximately 14,627 active-duty service members identify as American Indian or Alaska Native, according to a 2019 demographics report from the Defense Department.

O'Halleran told Military.com that Native American Vets have played a vital role in the U.S. military.

"Our Veterans have done so much for our country, and Native Americans have had the highest level of participation in our military on a per capita basis throughout America's history," he said. "We need to acknowledge that, but the best thing we can do for our Veterans is to make sure they're highly educated, and help them and their families out."

O'Halleran represents Arizona's 1st Congressional District, where 22.3% of residents are Native American, according to 2018 data from the U.S. Census Bureau.

"We have Veterans that have to travel five hours one way to get care and then turn around and go five hours back in the same day," O'Halleran told Military.com. "Even with the added funding that we've seen, it still hasn't gotten to a level where a Veteran, whether on tribal lands or in rural America, is getting treated the same as a Veteran in urban environments. They need to be able to get the benefits that they deserve."

Native American Veterans face unique challenges as they transition from military to civilian life, Johnson said in a statement to Military.com.

"Currently, at TCUs, there is no specific programming to help Native Veterans make the transition from active duty to college life," he said. "By expanding the already successful VetSuccess on Campus program to TCUs, Native Veterans will be able to access on-campus benefits assistance and counseling that other Veterans currently benefit from."

Johnson said he decided to co-sponsor the bill because "educational … programs are critical to the long-term success of our Native Veterans."

Moving forward, O'Halleran said that the government "needs to understand that they have to get out there" and proactively reach out to Native Veterans.

"There's a fairness issue, and we need to make sure that people start to understand that we have to reach out to our Veterans. You can't just sit in Phoenix or Tucson and say, 'Oh, we have a hospital here, or we have a program here," he said. "We need to continue down the path of treating our Veterans in these tribal and rural areas to the same level as we treat people in the rest of America."