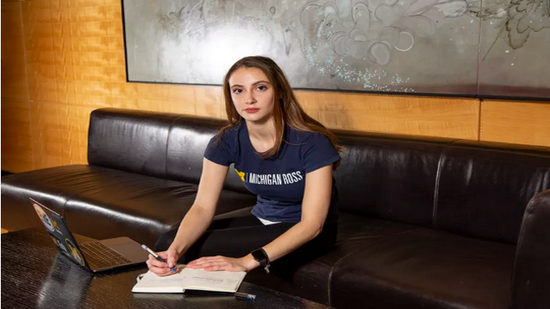 Paige Dotson, now 22 and attending the University of Michigan, was forced to withdraw from DePaul her freshman year after the federal government stopped paying for her college under the Post-9/11 GI Bill.

Now, she will get a refund of money she has paid for college and see her $20,000 debt waived.

The decision came after a Sun-Times investigation prompted Durbin, D-Illinois, U.S. Rep. Dan Kildee, D-Michigan, and nine other senators and representatives to send a letter to the Navy in which they called out “bureaucratic failures” that caused the problem.

On Monday, the Navy informed retired Senior Chief Boatswain’s Mate Russell Dotson it would retroactively apply unused time off that he’d earned during 22 years in the military to his service record and push back his official retirement date by about five months.

That will allow the federal Department of Veterans Affairs to restart his daughter’s college payments and wipe out the debt it has been trying to collect.

Paige Dotson, who transferred to Michigan to get in-state tuition after leaving DePaul, said the VA told her it will retroactively cover about a year and a half of college in addition to what it initially paid at DePaul. She estimates this will come to about $40,000 to $50,000 she won’t have to pay.

And her younger brother will be able to get two years of college benefits thanks to his father’s decorated military service, which he had extended for a final four years after being offered the college payments for his children.

“I’m happy, but it’s kind of strange,” Paige Dotson said Monday. “I’m still very cautious about it. I do feel a lot better.”

Russell Dotson, who served active duty and in the reserves, was honored for “decisive and selfless actions” in helping save two lives in 2010 during an attack in Kandahar, Afghanistan.

He agreed to extend his time in the Navy after being offered a promise that he would be able to transfer his 36-month GI Bill benefit to his daughter and son — 18 months of college tuition, books and living expenses for each.

Before he retired in 2017, the Navy told him he’d satisfied all of his obligations.

But midway through his daughter’s freshman year, the government said her father was short 89 days of service — which, as a reservist, would have amounted to six days of weekend drills.

Her college funding was pulled, and the government demanded she repay $20,000.

“Mr. Dotson’s GI Bill benefits were wrongly pulled from him because of an error by the Navy,” Durbin said. “Because of this, the secretary of the Navy came to my office to tell me they were going to make this right for Mr. Dotson and his family. I’m glad there is a good ending to this that restores Mr. Dotson’s hard-earned benefits.”

Kildee, who represents the Flint, Michigan, district where Russell Dotson, 52, lives, helped coordinate the appeal to the Navy and spoke with Modly by phone.

“Retired Senior Chief Dotson served our country for 22 years and did everything right, yet because of a bureaucratic failure was denied his military education benefits,” Kildee said. “I commend the acting secretary of the Navy for acting quickly on this case.”

Russell Dotson had tried on his own to correct the problem, without success. He told the Sun-Times last month he would drill for the six days if it would erase the debt hanging over his daughter, who had to work multiple part-time jobs and take out loans.

“I could not possibly be happier,” Dotson said Monday. “It seems like a simple fix.”

The Dotsons aren’t the only military family experiencing problems. A stretched military has enticed members to stay in longer by promising they’ll be able to transfer their Post-9/11 GI Bill benefits to their dependents.

But the rules are complicated. Numerous Veterans have said they were told in error they’d served long enough to qualify — only to have the money yanked away and debt collectors come after their children.

A GoFundMe page that Paige Dotson started at the urging of friends has been repurposed to assist other military families in dire straits after losing their expected benefits.