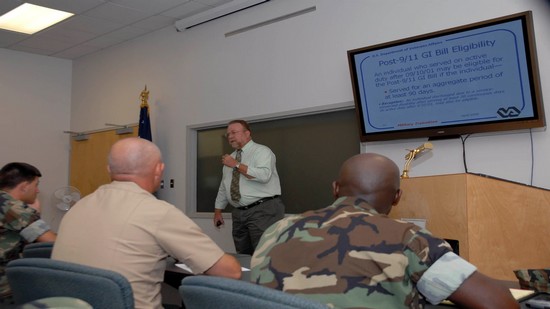 Student veterans hoping for resolution in a court case which could open an extra year of GI Bill education benefits to hundreds of thousands of individuals won’t get any resolution before the start of the fall semester.

But may see some legal progress in time for the spring.

The case — Rudisill v. Wilkie, pending before the U.S. Court of Appeals for the Federal Circuit — has gained the attention of numerous education and veterans advocacy groups in recent months due to its potential impact on veterans education benefits.

Last year, a lower appeals court ruled that the Department of Veterans Affairs’ practice of requiring veterans to give up their Montgomery GI Bill eligibility to receive Post-9/11 GI Bill payouts was improper.

That means that veterans who use up their 36 months of Post-9/11 GI Bill education benefits should still have access to 12 months of Montgomery GI Bill benefits if they paid into the program while they were serving. Under existing federal statute, any government higher education payouts are capped at 48 months.

Department of Veterans Affairs officials appealed that ruling earlier this year, and are scheduled to file additional motions early next week. After that, court officials are expected to schedule oral arguments in late August or September.

That pushes any resolution of the case later into the fall, well after classes for the upcoming semester have already begun.

Attorneys for the plaintiff had pushed for a quicker timeline, but with no success. Hunton Andrews Kurth Associate Tim McHugh, an Army veteran and co-counsel on the case, said he is optimistic a final decision by the federal circuit court could come before the end of the year.

In recent weeks, a pair of veterans advocates — National Veterans Legal Services Program and Veterans Education Success — filed briefs of support in the case, arguing the more generous interpretation of GI Bill payouts should be upheld based on past congressional intent and court precedents.

“The court should turn to the pro-veteran canon and adopt the interpretation that furthers Congress’s purpose of providing more generous education benefits to veterans,” they wrote.

David DePippo, senior counsel for Dominion Energy Services and co-counsel on the case, called their support “a big deal” in furthering the argument.

“These are two groups that are big players in this area,” he said. “They really have moved the ball in terms of veterans benefits in the past. So to have them take a look at this and sign on is significant.”

VA’s opposition stems from an argument that the use of both benefits programs amounts to “double-dipping” for veterans, and the potential extra costs of tens of billions of dollars in new education payouts in coming years.

Under current rules, the Post-9/11 GI Bill provides 36 months of tuition assistance and living stipends to veterans (or their family members) who served at least three years on active-duty after Sept. 10, 2001. The total value of those payouts can top $20,000 a year, depending on where individuals attend school.

That benefit was finalized in 2010 and largely replaced the Montgomery GI Bill, which requires servicemembers to pay $1,200 in their first year after enlisting to be eligible for payouts after separation from the service. Individuals who used that education program last semester received payouts of about $2,000 a month.

The federal circuit court’s decision can be appealed to the Supreme Court, a process that could take several more years to complete.

In the meantime, VA officials have declined to recognize the lower court ruling and start awarding the extra GI Bill benefits to eligible veterans. McHugh said his legal team believes that represents a serious violation of federal rules, but enforcement of the issue would likely require a secondary lawsuit to force the issue.