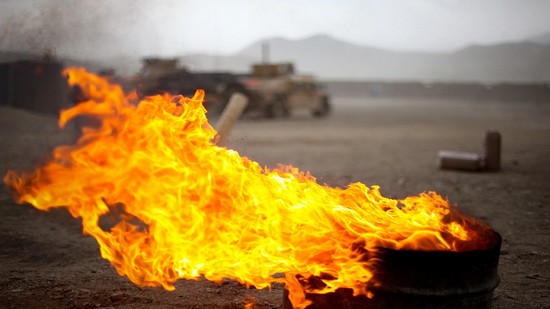 Veterans who were exposed to toxic chemicals through burn pits, base water contamination or other military-related events would be given new testing and benefits access under legislation introduced in the Senate on Friday.

The move comes just days after the House passed a series of new burn pit provisions in its draft of the annual defense authorization bill, and amid a renewed conversation on how Veterans Affairs officials should handle cases of alleged toxic exposure even when scientific investigations are still ongoing.

The latest measure, being introduced Friday by Senate Veterans’ Affairs Committee member Thom Tillis, R-N.C., was inspired in part by water contamination issues at Marine Corps Base Camp Lejeune in his state, which sickened thousands of Veterans and their families.

Despite widespread knowledge of the problems there, Veterans Affairs officials did not start granting disability benefits connected to the chemical exposure there until 2015.

“Veterans stationed at Camp Lejeune spent decades pushing for documentation of their exposure and fair treatment for the damages caused by the military, but this cannot continue to be the norm,” Tillis said.

“(This bill) ensures that all Veterans are given a fair and uniform process to receive the health care and benefits to which they are entitled following exposure to toxicants during their service.”

The bill follows recommendations from a new coalition of advocacy groups focused on toxic exposures, with the goal of collecting better research and treatment options for affected Veterans.

Retired Lt. Gen. Mike Linnington, CEO of Wounded Warrior Project, which launched the coalition, praised the new proposal as “necessary reform to help those coping with these specific wounds of war.”

The measure would establish an independent “Toxic Exposure Review Commission,” charged with identifying and investigating allegations from troops and Veterans. That panel would include health experts, Veterans advocates and environmental researchers and offer regular reports to VA officials and Congress on their findings.

The legislation would also mandate closer coordination between VA leaders and the National Academies of Sciences, Engineering, and Medicine to establish links between toxic exposures and Veterans health issues, and broaden testing and presumptive benefits status for those conditions.

The issue of exposure to toxic chemicals from burn pit smoke during the wars in Iraq and Afghanistan has gained attention in recent years, as some Veterans from those conflicts have developed unusual cancers and respiratory illnesses after returning home.

But establishing a connection between the toxic smoke and the health issues has proven problematic, because of a lack of timely monitoring of the fires and resistance from some VA leaders to establish benefits precedents without clear scientific links.

“Right now, our brave servicemembers overseas and our returning Veterans continue to suffer the health effects of their exposure to toxic burn pits,” Ruiz said in a statement following the adoption of the measures. “Our heroes cannot afford to wait.”

The authorization bill is currently in negotiations with the Senate, but is considered must-pass legislation by congressional leadership. Whether Ruiz’ provisions can survive conference committee work remains unclear.

Tillis’ stand alone bill, which has bipartisan support, faces an even more uncertain future in Congress this year. Lawmakers are scheduled to go on summer break in coming days, then have only a few days of legislative work in the fall before a pre-election recess. Finding time for hearings and votes on the topic could prove difficult.

The North Carolina senator said he is hopeful the measure can move through those obstacles.

“It’s clear the men and women who served our country deserve better,” he said.