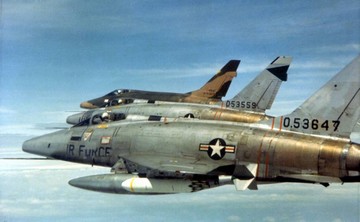 Nearly 35,000 active-duty airmen who flew on fighter jets between 1970 and 2004 are at higher risk of developing prostate cancer and melanoma, with possible links to non-Hodgkin’s lymphoma and testicular cancer as well, according to the largest-ever study on military aviation and cancer.

While the research offers some clues about possible cancer prevention measures, it’s not enough to warrant broad policy changes for the Air Force fighter community, according to the Air Force’s School of Aerospace Medicine at Wright-Patterson Air Force Base, Ohio.

The school released its findings in a May 26 memo first obtained by Defense One.

Researchers launched the study in 2020 to look for possible links between fighters and 10 types of cancer: colorectal; pancreatic; melanoma; prostate; testicular; bladder; kidney and renal pelvis; thyroid; brain and other nervous system cancers; plus non-Hodgkin’s lymphoma.

Those diseases were chosen based on previous research, theoretical risks, anecdotal reports and the input of the Red River Valley Fighter Pilots Association, a group founded to raise awareness of American aircrews who were missing, killed in action or taken prisoner during the Vietnam War, the report said.

The Air Force focused on fighters that were flown most often during the Vietnam War from 1965 to 1973: the F-100 Super Sabre, the F-105 Thunderchief, the F-4 Phantom II and its RF-4 variant used for reconnaissance. Other fighters in the inventory since the war were part of the study as well, but the report did not break out data on those platforms.

Researchers considered Air Force fighter pilots and weapons system officers who were on active duty for at least one day between June 1, 1970, and Dec. 31, 2004, and logged at least 100 hours in a jet. They tracked data on those airmen through the end of December 2018.

As is still the case, fighter pilots and their backseat crews were typically white men. Black airmen comprised 17 percent of the group studied; women made up less than 1 percent of aviators in the fighter community during that time.

One-third of men in the study group flew the F-4, followed by the RF-4 at 8 percent, F-100 at about 6 percent and F-105 at about 3 percent. Half of the group flew other kinds of fighter jets in the years after the war.

Those who piloted the single-seat F-100, the first jet capable of going faster than the speed of sound, may be particularly vulnerable to those cancers, researchers found.

Nearly 2,300 airmen included in the study had flown the F-100, which retired in 1979 after more than 25 years in service. About 8 percent of those airmen in the study died of cancer, more than those who worked on other jets, though researchers said the true number may be higher.

“Compared to fighter aviators who never flew the F-100 … male fighter aviators who flew the F-100 had greater odds of being diagnosed and dying from colon and rectum cancer, pancreas cancer, melanoma skin cancer, prostate cancer and brain cancer,” the report said. “They also had greater odds of dying from thyroid cancer and non-Hodgkin lymphoma, despite similar odds of diagnosis.”

While the F-100 provided cover overhead during missions to spray the carcinogenic herbicide Agent Orange in Vietnam and Laos in the 1960s, the study couldn’t prove a definitive link between Agent Orange exposure and cancer in Super Sabre aviators.