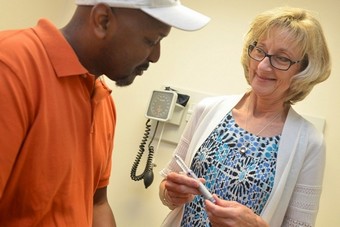 Prostate cancer is the most commonly diagnosed cancer among males, second only to skin cancer, and affects more than 3 million men in the United States, according to the National Cancer Institute. During Prostate Cancer Awareness Month, health care providers are encouraging men of all ages – especially those with a family history – to learn more about the disease.

“Prostate cancer can impact all men,” said Army Col. Inger Rosner, director of the Department of Defense Center for Prostate Disease Research at Walter Reed National Military Medical Center in Bethesda, Maryland. “It’s important for men to know if they want to be screened, how and when to be screened, and what their treatment options are if diagnosed, so that they can be equipped to make decisions that are best for their health.”

The National Institutes of Health estimates that nearly 165,000 men in the U.S. will be diagnosed with prostate cancer in 2018. Although the disease is the second leading cause of cancer death among men in the U.S., it’s a very slow-growing disease, NIH says. Nearly all of those who get prostate cancer – more than 98 percent – are alive five years after diagnosis.

Symptoms can include weak or interrupted flow of urine, sudden urge to urinate, frequent urination, pain or burning while urinating, trouble starting the flow of urine, and trouble emptying the bladder completely. Pain in the back, hips, or pelvis, as well as blood in the urine or semen, can also be indicators.

Rosner said prostate cancer is common in older men but can still affect younger men, particularly if they have a male relative with a history of the disease. Age is the most common risk factor, but other important risk factors include race, genetic factors, and family history. Men who have a relative with prostate cancer are twice as likely to develop the disease as those with no family history, Rosner noted.

“If you have a positive family history, that puts you at a potentially higher risk for having prostate cancer, and you should bring that potential risk up with your primary care doctor,” she said, adding that patients can then decide with their providers whether or not to be screened for prostate cancer.

Patients can be screened with a prostate-specific antigen blood test, also known as a PSA test. The test measures the level of PSA in the blood; an increased amount may indicate prostate cancer. But increased PSA levels alone do not diagnose the disease, which is confirmed through a biopsy.

The American Urology Association encourages men age 55 to 69 to undergo a PSA test every year. The U.S. Preventive Services Task Force considers the decision to undergo periodic PSA screening to be an individual choice for men of that age group, stating that they should have the opportunity to discuss its potential benefits and drawbacks with a clinician. The task force said PSA screening offers a potential benefit of reducing the chance of death from the disease in some men, but also carries potential risks, such as false-positive results, over-diagnosis, and overtreatment.

A majority of prostate cancer is treatable, explained Rosner. Since the disease advances slowly, not all cases require treatment, which can alter quality of life, she said. Men undergoing treatment can experience side effects, such as fatigue, pain, vomiting, or nausea as well as urinary, bowel, or erectile dysfunction.

Patients with low-risk prostate cancer can discuss alternative options with their physician, such as monitoring the cancer – known as active surveillance. Treatment options can include radiation therapy, surgery, chemotherapy, and hormone therapy, among others. All treatment regimens must be balanced against quality-of-life concerns, considering the potential side effects of each treatment, the aggressiveness of the cancer, and the overall life expectancy of the patient, said Rosner.

“It’s a very treatable disease, but the treatments can have a significant impact on quality of life,” she said. “For some low-risk or low-grade tumors, we tend to favor active surveillance, which is monitoring the disease but not necessarily treating it, because you can live with prostate cancer and not die from your prostate cancer.”

“While there’s no definitive way to prevent prostate cancer, men can help decrease their risk by being physically active, maintaining a healthy weight, and eating a nutritious diet,” said Rosner.

“Men’s health really comes down to having an open and honest conversation with your physicians or providers,” said Rosner. “The more that we educate and empower our patients, the better off their decision-making will be.”