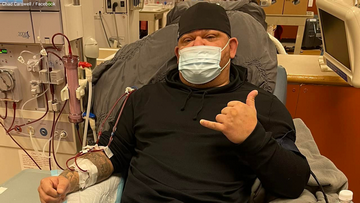 Chad Carswell refuses to be forced into taking the Covid-19 vaccine — and as a result, he cannot receive a life-saving kidney transplant

U.S. Air Force Veteran Chad Carswell, 38, of Conover, North Carolina, is in desperate need of a kidney transplant to save his life.

But he does not believe that getting a COVID-19 vaccine is the best thing for him, and as a result — because he won't take the vaccine, which is required for transplant candidates by hospitals in his area — he's been denied a life-saving kidney transplant.

That, however, does not seem to be taken into account, he said, by the medical powers that be regarding transplant procedures.

"I'm blessed," emphasized Carswell. "I'm still here — so as long as I'm here, I still have a chance."

Carswell, the oldest of four in his family, said his parents as well as his family and friends understand his position and support his point of view.

"Dialysis days for me are Monday, Wednesday and Friday. Those are hard. They're long days for me. Very draining and very hard on my body. But I'm pushing through them."

Dialysis, however, will only preserve his life for a certain amount of time. A double amputee, Carswell has had previous heart surgeries. He's also had six heart attacks (yes, six).

Earlier in his life, he weighed over 400 pounds, he told Fox News Digital. He also suffered from Type 2 diabetes (which is how he lost his legs). But he's been working out regularly and today is 230 pounds.

His diabetes is under control through a careful diet and plenty of exercise, Carswell said; he's taken no medications for that.

His kidneys, though, are operating at 4% effectiveness — and he's been told he will die without a transplant.

Carswell said, "I am not anti-vax. This isn't political. I'm all about choice. And I believe that anybody who chooses to get the vaccine because they think that it's safe for them and it's what's best for them and their family, plus the boosters — by all means, do whatever you need to do. You're not wrong."

"But me choosing to do the same thing for me [meaning to have his freedom of choice] is the exact same thing as you choosing to do what you feel is right for you. I'm not wrong, either. I have my own opinions."

"I'm a Veteran. I fought for this country. And I believe in my right to be able to choose what I think is right for me."

"I've had COVID twice," he emphasized. "I have natural immunities for it. For me, it is about the choice of things that are right for me."

Carswell said he's gotten a lot of support from people far and wide for his positions. But he's also gotten a lot of negativity, he said, from those who question why he would want a transplant when he remains unvaxxed.

He also said, "This is not about me. It's about the world we're going to be living in 10 years from now. And if we don't stand up now, and stop our freedoms and our rights from being taken away from us, then what kind of world are we living in years from now?"

Fox News Digital asked Carswell about his family and how worried they must be about him, given his situation.

"I'm very, very close to my dad and my mother," he answered. "My dad is 100% my best friend. And my dad is the reason I'm still here today. I almost died [earlier in his life]. Yet I made it through everything because of my dad."

He talked about his dad serving America as a Marine.

"I was raised right," he said. "My family and I are very, very close, and everyone respects me and is proud of the stance that I've chosen to take. They support me."

He noted that at 38 years old, he is "going to stand by his decision and live my life" as best he can, he said.

"I've been sharing my story for the last five years, very openly, even before COVID," Carswell said, referring to his personal battle for better health. "My entire family has been there every step of the way."

He also said that he will keep his dialysis going for as long as he can.

"But for me, it's either I get a kidney transplant, or I die," he said. "Nobody wants to lose me — nobody wants me to die," he added.

Carswell also said, "I'm a firm believer in God and in Jesus Christ. My faith has a lot to do with how I've been able to stand up against [the negative people] out there," he said.

"I get hundreds of [negative] messages a day," he also said, referencing social media commentary. "'Die' … ‘We know where the best caskets are made’ … 'You're not going to be here much longer' — things like this" come his way all the time, he said.

His faith, however, keeps him strong. "Christ tells me 365 times in the Bible, ‘Do not fear’ — so obviously he meant it," he said.

Carswell also said, "Love is the only thing that's going to make things better — not hatred."

"I've had people try to make this political … But if people would just worry about themselves, and do what they feel is right for them, and not worry so much about what other people are doing — then we would be in a much better position today," he told Fox News Digital.

Regarding whether he is still hoping to get a kidney transplant one day while remaining unvaxxed, Carswell said, "Absolutely I am hoping that changes, because my mind won't change on getting the vaccine even if it means it costs me my life."