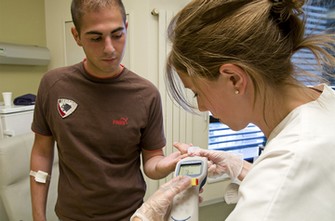 Metformin, a first-line diabetes drug used for decades, may boost the risk of birth defects in the offspring of men who took it during sperm development, according to a large Danish study. Sons born to those men were more than three times as likely to have a genital birth defect as unexposed babies, according to the paper, published in the Annals of Internal Medicine today.

The genital defects, such as hypospadias, when the urethra does not exit from the tip of the penis, were relatively rare, occurring in 0.9% of all babies whose biological fathers took metformin in the 3 months before conception. But epidemiologists say the findings are important because tens of millions of people worldwide take metformin, chiefly for type 2 diabetes.

“When I saw the paper … I thought: ‘Yup, this is gonna go viral,’” says Germaine Buck Louis, a reproductive epidemiologist at George Mason University who wrote an editorial accompanying the report. “[Metformin] is widely used even by young men because of the obesity issue that we have. So that is potentially a huge source of exposure for the next generation.”

However, Buck Louis and every other scientist interviewed for this article stressed that the paper’s findings are preliminary and observational and need to be corroborated; they add that factors besides metformin may have influenced the findings. The scientists cautioned men with diabetes against abruptly stopping metformin before trying to conceive.

“Metformin is a safe drug, it’s cheap, and it does what it needs to do” by controlling blood sugar levels, says the paper’s first author, Maarten Wensink, an epidemiologist and biostatistician at the University of Southern Denmark. Any change in medication “is a complex decision that [a couple] should take together with their physicians,” he says.

Use of metformin, a synthetic compound that lowers blood sugar by boosting insulin sensitivity, has skyrocketed with the obesity epidemic and attendant diagnoses of type 2 diabetes. In the United States in 2004, 41 million prescriptions for the drug were written; by 2019 that number was 86 million.

The drug has been in use since the 1950s, but this is the first large study to rigorously analyze any paternally mediated impact on human birth defects. Although metformin’s use skews toward older people, the rise in diabetes means more men in their reproductive years are taking the drug. In the United States, prescriptions to 18- to 49-year-olds with type 2 diabetes grew from fewer than 2200 in 2000 to 768,000 in 2015.

The researchers analyzed records from more than 1.1 million babies born in Denmark between 1997 and 2016, using the country’s comprehensive medical registries to connect data on births, paternal metformin prescriptions, and birth defects. In the 1451 offspring of men who filled metformin prescriptions during the 90 days before conception, the period when sperm are being made, the team found a 5.2% rate of birth defects, compared with 3.3% among unexposed babies. That translated to 1.4 times higher odds of at least one major birth defect, including genital, digestive, urinary, and heart defects, after adjustments for paternal age and other factors.

The numbers were small—13 metformin-exposed boys were born with genital defects. But after the researchers adjusted for factors including parental ages and maternal smoking status, they found a 3.39-fold rise in the odds of a genital defect. “The rate per se was surprisingly high,” Wensink says.

Reassuringly, the researchers saw no effect in offspring of men who took the drug earlier in life or in the year before or after the 90-day window of sperm production. “It really has to do with taking it in that window when the sperm … is being developed,” says senior author Michael Eisenberg, a urologist at Stanford Medicine.

The team also found no additional risk in unexposed siblings of metformin-exposed babies, or in infants of diabetic fathers who took insulin or were not on metformin. All those findings suggest it’s the drug’s impact on sperm formation, rather than diabetes or another factor intrinsic to the men, that’s responsible.

But the researchers acknowledge that men with diabetes who took metformin and those who didn’t may have differed in attributes such as obesity or how well their disease was controlled—data that were not accessible to the researchers.

Nor are scientists sure exactly how the drug may be impacting sperm. Studies in fish and mice suggest metformin can disrupt the development of male reproductive organs, and one small study found metformin reduced serum testosterone levels in men.

The caveats make scientists cautious about drawing conclusions from the paper. “This paper is the first word, not the last word,” says Russell Kirby, a birth defects epidemiologist at the University of South Florida. “It’s definitely going to require additional research.”