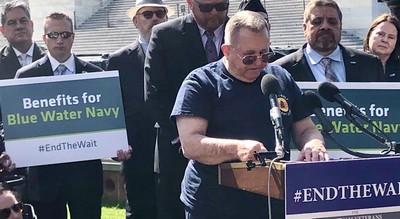 About 14 months after Congress and the president passed into law a measure to grant Veterans Affairs benefits to sailors who served on ships off the coast of Vietnam, VA has granted about 22,500 of those claims.

The Blue Water Navy Vietnam Veterans Act required the Department of Veterans Affairs to provide disability benefits to Veterans who served in the waters off of Vietnam. The measure was just one more provision in a decades-long fight to guarantee the same benefits to thousands of Navy Veterans who served in the waters offshore of Vietnam that their land and brown-water comrades were already entitled to after potentially being exposed to Agent Orange.

Since then, the department has received 66,853 Blue Water Navy disability claims as of Aug. 31, VA Press Secretary Christina Noel told Connecting Vets this week, more than 8,300 per month since VA began processing the claims. From that total, VA has processed 31,774 (48%) and granted 22,524 of those (71%), denying about 29%. The claims granted represent about 34% of all claims filed so far.

Those awarded claims amount to about $641 million in benefits to those 22,524 Veterans or their survivors, according to VA.

“The team at NARA recognizes the importance of this effort making it easier for BWN Veterans to receive the benefits they’ve earned without burdening them with paperwork,” VA Secretary Robert Wilkie said in a statement. “Since Jan. 1, VA has processed thousands of claims and encourages every Veteran, dependent and surviving spouse who is eligible to file a claim as soon as possible.”

VA provided digital images of the deck logs to NARA, available through the National Archives catalog. Navy logs were finished in December 2019 and Coast Guard logs were completed this month.

“Through this scanning project, VA contractors digitized declassified Navy and Coast Guard deck logs from 1956-1978 in NARA's holdings, including the log of the hospital ship USS Sanctuary, which I served aboard during the Vietnam conflict,” Archivist of the United States David S. Ferriero said in a statement. “As a Veteran from this era, I recognize the unprecedented value this provides to Veterans making these logs easily accessible online.”

In June, about a year after the bill passed into law, VA had approved 17,401 claims out of more than 58,300 filed and has increased the number of approved claims by about 29% since then.

Both the House and Senate passed the bill granting Blue Water Navy Vets benefits unanimously and the president signed it into law in June 2019.

About a week after the president's signature codified those benefits, VA Secretary Robert Wilkie delayed all claims processing until Jan. 1, 2020, as first reported by Connecting Vets. That stay effectively stalled the benefits many aging and ill Veterans thought they had finally gained with the passage of the bill in Congress.

Pleas from Veterans, their families and advocates over the following months rendered no change or response from VA, and those who reached out to the president told Connecting Vets they received no response.

At the time, Wilkie said the department was "working to ensure that we have the proper resources in place to meet the needs of our Blue Water Veteran community and minimize the impact on all Veterans filing for disability compensation."

Veterans were allowed to file their claims, but they were not processed until Wilkie's stay lifted on Jan. 1, 2020.