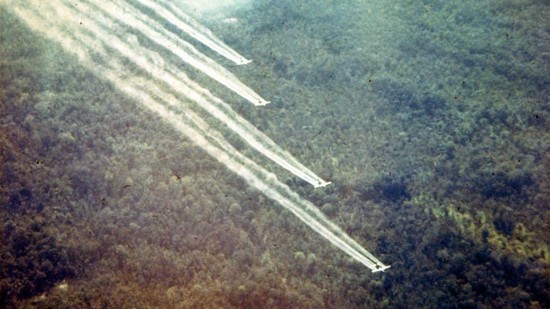 Tucked among the more than 1,700 pages of the the federal funding bill expected to pass Congress this week is an order from Congress to the Department of Veterans Affairs to share the VA's plan to extend disability benefits to more Agent Orange-exposed Vets.

Congress wants to know whether VA plans to add four new diseases to the list of conditions Veterans experience that are presumed to be caused by Agent Orange exposure. Those include bladder cancer, hypothyroidism, hypertension and Parkinson's-like symptoms, though the bill does not mention them by name.

The legislation requires the VA to send a report to Congress within 30 days of the bill's passage that must include the "a detailed explanation" for the years-long delay to make a decision on whether to cover those diseases. The report also must include a cost estimate for covering those diseases and a specific date when the VA expects the changes to go into effect.

The funding bill is expected to pass the House and Senate this week.

Expanding the list of health conditions presumed to be caused by Agent Orange exposure could provide disability pay and health benefits to more than 83,000 Veterans.

Two years ago, then-VA Secretary David Shulkin decided to add more diseases to the VA's list of health concerns that qualify a Veteran for Agent Orange disability benefits, but White House officials stood in Shulkin's way, citing concerns about the cost of covering the additional diseases and requesting more research, according to documents obtained by a Veteran through the Freedom of Information Act and provided to Connecting Vets. Military Times's Patricia Kime first reported on the documents.

VA leaders say they're waiting on the results of two studies before making a decision:

Both studies are being conducted by the VA.

Earlier this year, Veterans Health Administration acting head Dr. Richard Stone told Congress the VA "hoped" to make a decision on those illnesses "within 90 days," which was previously reported by Connecting Vets.

That deadline has long passed. It's been seven months, and thousands of Veterans are still waiting for the VA to deliver on its promise.

Repeated attempts by Connecting Vets to get an update from VA officials on whether the department had a forthcoming decision are consistently met with the same statement: "VA has no announcements on Agent Orange presumptive conditions at this time."

A list of the diseases currently linked to Agent Orange and eligible for benefits can be found here.