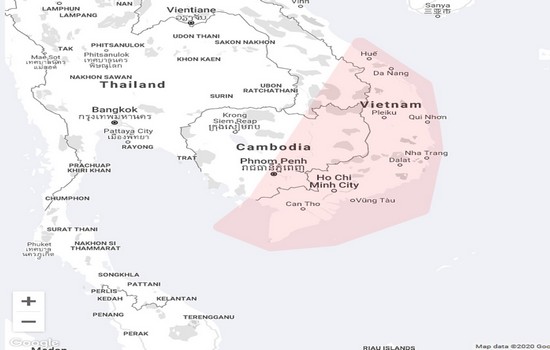 A new interactive map could help ill Vietnam Veterans who served on U.S. ships during the war determine whether they could be eligible for Agent Orange-related benefits.

A retired Navy chief radioman has teamed with a Florida-based law firm to make the map available to “blue water” Vietnam Veterans, their widows and anyone interested in seeing where Navy and Coast Guard vessels served offshore during the decade-long conflict.

The information, said Ed Ball, director of research for Military Veterans Advocacy Inc., could be useful for determining whether a ship served in the waters designated by the Blue Water Navy Vietnam Veterans Act of 2019.

The law, signed June 25 by President Donald Trump, allows former service members who served on a ship that operated within 12 nautical miles of a line of demarcation established by law and have an illness presumed related to herbicide exposure apply for health benefits and disability compensation.

Ball told Military Times he has worked on the map for four years, poring over Navy ship logs and plotting the vessels’ coordinates along with the dates the ships sailed within the designated zone.

By clicking through the map, for example, Veterans can learn that the aircraft carrier America served within the limits in December 1972 near Da Nang. The Coast Guard high endurance cutter Bering Strait crossed into the designated waters once in 1968 and three times in 1970.

“Over 1,700 deck logs have been plotted to date, and we continue to add new information from the Blue Water Navy Vietnam Veterans Association master list of deck logs,” Ball said.

The map is hosted by the disability law firm Hill & Ponton. Numerous law firms vie to assist Veterans in drafting and filing disability claims with the Department of Veterans Affairs; many Veterans service organizations provide similar assistance free of charge.

“Improving transparency and simplifying access to this data is essential as we support the Vietnam Veterans … now suffering the effects” of Agent Orange exposure, Hill said in a release.

As part of filing disability claims, Veterans must show they served on a U.S. vessel when it traversed the congressionally drawn zone.

Data from the map is derived from the National Archives and ships logs as well as the Blue Water Navy law, according to Ball.

Hill said as Veterans and family members send in additional data they have collected, the map will be updated.

Ball said service members who were on ships that aren’t yet mapped or those who served outside the zone, such as in the Gulf of Tonkin, should contact Military Veterans Advocacy and the Blue Water Navy Association if they have one of 14 diseases listed by the VA as linked to Agent Orange.

“We have other instances of exposure and they may still be able to file a claim,” he said.

Meanwhile, the Department of Veterans Affairs has started approving claims from the nearly 90,000 Veterans who may be eligible for disability compensation. According to Ball and other members of the Blue Water Navy Association, some Veterans and widows have been notified of their claims approvals while while others are simply finding deposits from VA in their bank accounts.

Jim Caldwell, , a Navy Veteran who lives in Mission Valley California and has type 2 diabetes, checked his balance and found a deposit for $6027.05.

“Glorious and happy day,” Caldwell wrote in a message on Facebook. “Please … let the rest of the blue water navy know that it IS coming and on the way!”