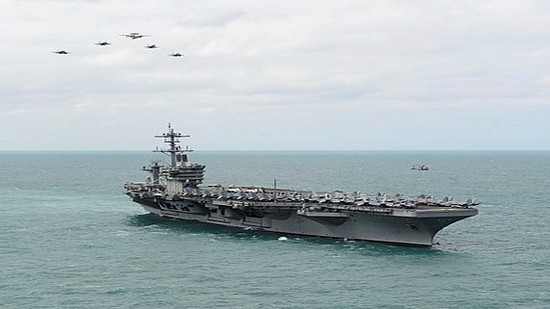 Visiting Vietnam is something not many Sailors will experience in their Navy career. The aircraft carrier USS Theodore Roosevelt (CVN 71) is only the second carrier to visit Vietnam in more than 40

They volunteered at multiple establishments, including the Agent Orange Center of Da Nang, a vocational school for people affected by Agent Orange, and Dorothea’s Project Legacies Center, a children’s orphanage in Da Nang.

Agent Orange is a chemical that was used during the Vietnam War, and was harmful to anyone

who came into contact with it. The children of Agent Orange victims often have mental and physical disabilities. The Agent Orange Center helps these children learn in a fun and welcoming environment.

Phan Phanh Pien, the vice president of the Agent Orange Center said more than 30 children attend the school, where they learn general education, as well as vocational skills to help them later in life.

“We teach them special education living skills, and we give some of them vocational training,” said Pien. “We want to enlighten the children so they can be better, confident, and find a job in the future.”

As a gift to the children, who were not at school, Sailors painted a mural to celebrate the 25 years of diplomatic relations between the U.S. and Vietnam.

“We painted this beautiful 25th anniversary mural for them,” said U.S. Navy Retail Services Specialist Seaman Keeshma Singh. “The mural was to commemorate our peace with them. It was amazing, knowing that they’re going to come back and see our gift to them.”

Sailors also spent the day beautifying the school, doing yardwork and general clean-up to surprise the children when they return to class.

“I was heartbroken when I heard they wouldn’t be there,” said Singh. “But knowing that I was still able to make an impact to them had my heart racing.”

Dorothea’s Project Legacy Charity Center is a children’s orphanage that provides schooling and shelter for children in need to ensure a better future for all involved.

for a community relations event at the center March 6, 2020,.

According to U.S. Navy Aviation Ordnanceman 3rd Class Khaden D. Vaughn, when the Sailors approached the facility they were met by the excited, smiling children living at the charity center. They could not wait to talk and spend time with the people who came to visit them.

“Interacting and playing with the children felt great,” said Vaughn. “It was a very humbling experience being able to interact with those less fortunate.”

The children at the charity center spent the day with Sailors playing games, sports and making arts and crafts. They also listened to a performance by U.S. Navy musicians from the U.S. Pacific Fleet

“The kids were great, it seems like they really enjoy themselves here,” said U.S. Navy Operations Specialist 1st Class Kimberly Loughridge. “Being able to make them smile was one of my favorite parts of Vietnam.”