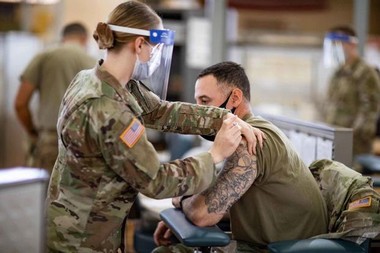 Fifteen months after launching an effort to develop a vaccine against COVID-19, the Walter Reed Army Institute of Research is preparing for a clinical trial, seeking volunteers for a small safety study.

The Army's vaccine candidate uses a new technology involving a Spike Ferritin Nanoparticle, or SpFN, that researchers hope can be adapted to protect against any coronavirus, including those that cause the common cold or deadly diseases such as COVID-19, Severe Acute Respiratory Syndrome, or SARS, and Middle East Respiratory Syndrome, MERS.

The WRAIR vaccine candidate has been tested in mice and monkeys and is now ready for human safety trials, according to officials at the institute, which falls under Army Medical Research and Development Command.

"Even before recent COVID-19 variants were identified, our team was concerned about the emergence of new coronaviruses in human populations, a threat that has been accelerating in recent years," Dr. Kayvon Modjarrad, director of the Emerging Infectious Diseases Branch at WRAIR, said in a released statement. "That's why we need a vaccine like this: one that has potential to protect broadly and proactively against multiple coronavirus species and strains."

The study is being conducted at WRAIR's Clinical Trials Center and will enroll 72 healthy adult volunteers ages 18 to 55 who will be randomly placed in placebo or experimental groups.

With that genetic makeup in mind and building on research on the coronavirus that causes Middle East Respiratory Syndrome, or MERS, WRAIR scientists developed SpFN as a protein base that can carry one or more spike proteins engineered to block infection and elicit an immune response, according to Modjarrad.

While commercial manufacturers have produced four distinct vaccines against COVID-19, three of which are currently being distributed under emergency-use authorization in the U.S., WRAIR is playing the long game when it comes to developing a coronavirus vaccine for the future.

"We are in this for the long haul," Modjarrad said in a release. "We have designed and positioned this platform as the next generation vaccine, one that paves the way for a universal vaccine to protect against not only the current virus, but also counter future variants, stopping them in their tracks before they can cause another pandemic."

The vaccine was developed with support from the Henry M. Jackson Foundation for the Advancement of Military Medicine.

More than 176,000 U.S. service members have tested positive for COVID-19 since the beginning of the pandemic and 24 have died. Another 307 civilian DoD employees, contractors and family members also have died.

Worldwide, 132.1 million people have been infected with the coronavirus, and 2.8 million have died. There have been nearly 30.8 million cases in the U.S. and 556,307 American deaths as of April 4, according to Johns Hopkins University.

Across the Defense Department, 2.1 million doses of the COVID-19 vaccine -- made by Moderna, Pfizer or Johnson & Johnson -- have been administered to U.S. troops, family members, civilian employees and other essential workers, according to the Centers for Disease Control and Prevention.

On Tuesday, President Joe Biden implored Americans to get their vaccines, especially with cases on the rise in some areas and the spread of variants.

"We’re getting more and more data on just how effective these vaccines are," Biden said. "We’re making a lot of good progress … but we’re not even halfway to vaccinating 300 million Americans. We are still in a life and death race against this virus."