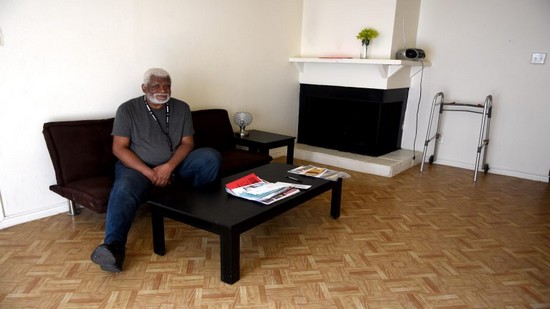 As Carl Davis added his signature to a simple one-bedroom apartment lease last December, he did so with a renewed sense of pride and accomplishment. Signing the lease meant that his name would be on the mailbox and the contents of the apartment would belong to him. When you’ve been largely homeless for 40 years like Davis, it’s the little things that restore pride and self-worth.

Davis served in the Army from 1973 to 1976. Upon separating from the service, he went back to school for a short time, started working and soon became victim to layoffs. Without steady work, life as Davis knew it took a different turn.

“I slept mostly in shelters,” said Davis. “I usually made it to a shelter just in time to find a bed for the night.”

Davis spent many years sleeping in various shelters throughout Dallas, in addition to some nights spent sleeping under a bridge. After spending three years at one Dallas shelter, he met members from VA North Texas’ Homeless Mobile Medical and Mental Health Veterans (HMMM-V) team. Its mission is to find homeless Veterans like Davis and assist them in VA healthcare enrollment, housing screenings and access to other available resources.

“We try and develop a trusting relationship with Veterans who would not ordinally engage the VA,” said Christi Godfrey, VA North Texas social worker. “By bringing the VA to the Veterans in the community, our hope is that he or she will come around, trust the VA, and start work on their housing goals.”

“I am able to connect with a lot of the Veterans I encounter because I am a 24-year Veteran myself,” said Ollison. “They want to talk to someone who understands them and what they have been through.”

From the streets to housing

Davis eventually allowed the team in and let them help. The team set him up with a primary care physician and established care at VA North Texas’ Dallas campus. Securing an apartment lease and dependable healthcare was not the end of Davis’ relationship with the HMMM-V Team. Ollison and Matin still check on him and provide transportation for his medical appointments.

“It gives me great pleasure to see how a Veteran progress from the streets to housing,” said Ollison. “It’s my drive for getting up every morning and coming to this job knowing we are making a difference in someone’s life.”

Davis’ life has radically changed as he no longer must hunt for a bed to rest his head or figure out where and when he would get his next meal. He is living day by day with a roof over his head, food in his kitchen and a renewed sense of hope.

“I take it easy now,” said Davis. “It just feels good to have my own place.”