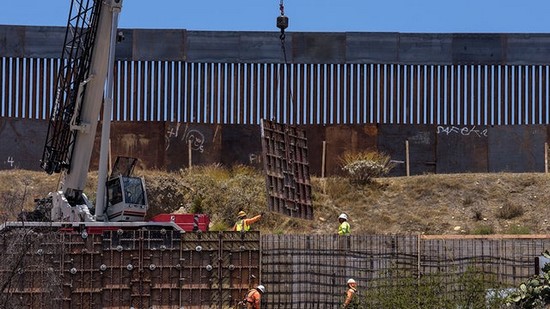 A Senate subcommittee on Tuesday easily advanced the $694.9 billion defense spending bill for fiscal 2020 despite Democratic concerns that it does not constrain the administration’s ability to dip into Pentagon coffers to build a border wall.

The top Democrat on the Senate Appropriations Subcommittee on Defense, Sen. Dick Durbin (Ill.), predicted more pushback when the full committee takes up the bill later this week, however.

“My reservations about this bill are less about what’s in this bill than what is not,” Durbin said at the markup. “Congress cannot and should not be silent when the power of the purse is undermined in this way. Why are we here? Why do we have an Appropriations Committee if this president can ask for money for certain purposes, we appropriate it and then he ignores us and takes the money for his own political agenda?”

Earlier this year, the Pentagon broke decades of tradition and transferred without congressional approval $2.5 billion from various accounts into its counter-drug fund to be used for President Trump’s proposed wall on the southern border.

In response to that transfer, House Democrats in their version of the defense spending bill would limit how much money the Pentagon would be allowed to move between accounts.

Then, the Pentagon announced last week that it was taking $3.6 billion from 127 military construction projects to build 175 miles of wall on the U.S.-Mexico border, in line with Trump’s emergency declaration at the beginning of the year.

Senate Democrats are planning to force a vote "within the next month” to nix the emergency declaration, Senate Minority Leader Charles Schumer (D-N.Y.) said Tuesday. But the last attempt to pass such a resolution was unable to override Trump’s Veto.

In Tuesday’s markup, Durbin said the funding transfers to the border wall call into question the Pentagon’s budget request.

“If they ask for the money for our troops, tell us they need it for readiness, tell us the only way we can make sure these men and women come home alive is by investing in their readiness, and we give the Pentagon that money and then turn around and have the president take it away for his wall, what in the world does that say about the assertions made by the Department of Defense in the initial request?” he asked.

Advancing the defense spending bill marks the Senate’s first movement on the fiscal 2020 appropriations bills, a milestone coming just weeks before government funding expires after Sept. 30. The Senate was in a holding pattern until Congress passed a two-year budget agreement last month.

With little time to complete their work, lawmakers are expected to pass a stopgap measure to keep the government open.

Sen. Richard Shelby (R-Ala.), chairman of both the defense subcommittee and the full Appropriations Committee, warned Tuesday that the military needs on-time funding.

“Without sustained and predictable investments to restore readiness and modernize our military, we will rapidly lose our military advantage, something we cannot afford in the light of increasing national security challenges from around the globe,” he said.

“This year, we are off to a late start, but with the certainty of the budget agreement — stable, two-year funding — and the decision by all parties to eliminate poison pills, I see no reason why we cannot repeat the successes of the fiscal year 2019 appropriations process," Shelby added.

The $694.9 billion in the bill advanced Tuesday would be broken down into $622.5 billion for the base defense budget, $70.7 billion for a war fund known as the Overseas Contingency Operations account and $1.7 billion in emergency funding to help facilities hit by natural disasters.

The money would go toward a 3.1 percent pay raise for troops, an active-duty end strength of 1.3 million service members, 96 F-35 fighter jets and 14 battleships, among other expenses.