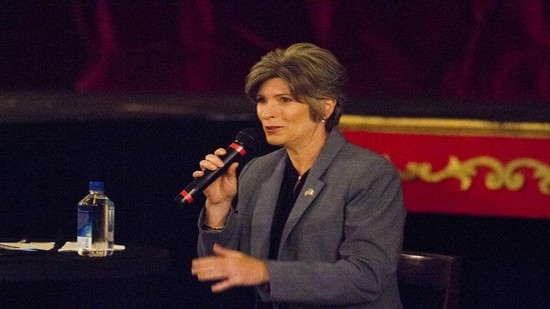 Says at forum America must be 'better partners'

ALBIA — Social Security was among the questions to U.S. Senator Joni Ernst at a town hall forum here Friday.

Ernst, a junior Iowa Republican senator, said those already retiring or nearing retirement will be protected. But younger workers should realize the program could change by the time they go to retire.

"We have made commitments to those that are currently on Social Security and of course those that are approaching retirement age. But there is no doubt that some point in the future we are going to have to address it."

Ernst said there are more people drawing funds from the program than working and paying into it.

Ernst said she hasn't seen a plan that's "strikingly brilliant" on how to fix the system, yet.

Amidst a question concerning whether America is holding its position as a world influencer in the President Donald Trump administration, Ernst reminded those at the forum the President is only one voice.

"The President will have one stance and he'll project one message," Ernst said. "We can either support him ... or we can also reassure our allies that we are true allies, and we will be there for them. Whether its trade or working on military exercises. Please keep that in mind. I agree we need to be better partners around the world."

Veteran's health issues came up more than once. First was a suggestion to separate Veteran's benefits from the Social Security program, which Ernst said she would follow up on.

In addition, the Veteran's Administration health system came up as well. Ernst went over recent changes and said the program is moving in the right direction. Though said she felt the VA and Veteran's health care is not yet where it needs to be.

"It is the most bureaucratic and most costly organization, second only to the [Department of Defense] in the government. But again, our Veterans have earned that care, we need to make sure that we're delivering on that care. Whether it's through the VA or another provider that they're comfortable with."

The country's finances, including lack of a budget and growing debt, were also raised as a concern.

Ernst said she is currently on a joint House and Senate committee to come up with new rules regarding this, with their work expected to be done early next year. The goal is to force Congress into proper budgeting, in hopes to decline the budget deficit and thus the national debt in the long run.

Currently, Ernst said Congress isn't doing its job and passing extensions or omnibus bills that don't force legislators to look at programs and to rein in government spending.

Even so, there will be a hill to climb in order to get legislation to this effect passed and implemented Ernst said. Though she's hopeful that this may be the last fiscal year without a budget coming out of the United States Congress.

"I hope that we are able to implement [the reform] quickly," Ernst said. "I hope that it actually passes Congress. Now this joint-select committee, we do run our ideas by leadership to make sure that they're on board and will try and whip everybody together to get the plan passed.

"But we have to pass it through our committee first, then it has to pass through the House and the Senate. So, we still got our work cut out for us but I think we got a good plan ahead."