Veteran, 88, saves girl from 'vicious' pit bull by hitting it with Christmas decoration 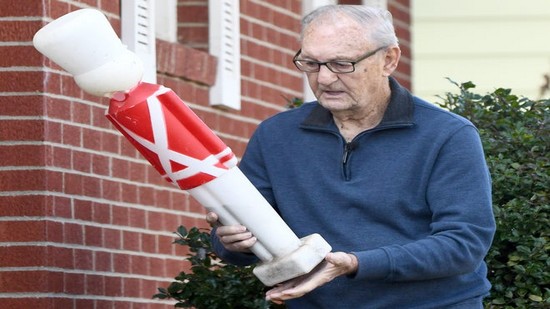 MASSILLON, Ohio – Leonard Miller was in his kitchen when he heard a frantic knocking at the door and the sound of a little girl screaming for help.

The 13-year-old girl told her neighbor that their dog was attacking her younger sister and would not let her go. Miller didn’t think. He reacted.

The following minutes were a blur as he rushed to the home next door.

Thinking back to Sunday afternoon, the 88-year-old wishes he would have grabbed his baseball bat before heading into the home. He didn’t want to be without a weapon, so he snatched the first thing he could — a 2- to 3-foot nutcracker that was part of a Christmas display outside of his neighbor’s home.

“This dog had this little girl down just growling,” Miller said. “He had her arm and was shaking her like he would shake an animal or something. I hit the dog in the head three or four times, and it wouldn’t let loose.”

After hitting the white pit bull a few more times in the back, it finally let loose its grasp on the 10-year-old child, Miller said. The girls ran out of the home, and Miller backed away from the dog, locking it in the house.

As he made his way out of the home, the dog didn’t make a move to attack him, he said. It didn’t growl at him. He yelled authoritatively at the dog: “No. No. No.”

He took the girls to his home, where he called an ambulance.

'I was whaling on that man':82-year-old female bodybuilder fights off intruder, breaks table on him.

On Monday, the dog’s owner surrendered it to the Stark County Sheriff’s Office.

″... That dog was vicious,” Miller said Monday morning. “I don’t know what they’re going to do. ... I couldn’t sleep too good because of everything that happened yesterday.”

Miller, a U.S. Army Veteran, served as a combat medic in Korea. His instincts kicked in, and he didn’t hesitate to help the girl. Even at 88, Miller uses the treadmill and lifts weights to stay in shape.

“My doctor tells me, ‘you’re in better shape than most 50-year-olds,’” Miller said.

It appeared the attack was unprovoked, Pomesky said. The girl was transported to the hospital with severe injuries, he added.

The 10-year-old girl’s condition was unknown Monday. She had severe injuries to her left arm, officials said.

The neighbor girl reminds Miller of when his own children were young. He said he often saw the girl, who is a cheerleader for youth football, doing somersaults and playing in the front yard.

“I’m glad I was here to help,” Miller said. “I don’t know what would have happened.”