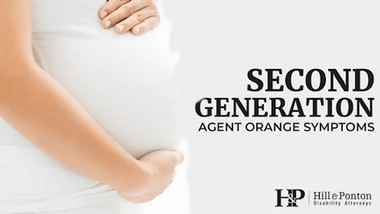 The United States military used a herbicide known as Agent Orange to clear plants, trees, and other foliage during the Vietnam War without regard to the potential health issues caused by herbicide exposure. In the decades since the Vietnam War ended, Agent Orange exposure has caused veterans to develop non-Hodgkin’s lymphoma, soft tissue sarcoma, chronic b-cell leukemias, ischemic heart disease, Parkinson’s disease, and other serious health problems.

The children of Vietnam veterans and occasionally even their grandchildren have also dealt with significant health problems from Agent Orange exposure as well. Birth defects such as neural tube defects are the most common effects of Agent Orange in the second generation exposed to Agent Orange. That’s the bad news. The good news is that children of Vietnam veterans with a qualifying health condition may be eligible for healthcare services, vocational training, and other benefits through the U.S. Department of Veterans Affairs.

Spina bifida occurs when the neural tube of the spine does not close all the way as the fetus develops during pregnancy. The improper closing of the neural tube typically happens during the first few weeks of pregnancy when a woman might not even realize she is pregnant yet. Because of this neural tube defect, the backbone that normally protects the spinal cord forms incorrectly and results in nerve and spinal cord damage.

Spina bifida can cause both physical and intellectual disabilities that range from mild to severe. The severity of spina bifida depends on the location and size of the opening on the spine and whether the damage reaches the spinal cord and nerves. Some children of Vietnam veterans born with spina bifida can never live independently, especially those with the most serious form of the neural tube defect. The three primary types of spina bifida include:

Benefits Available to Children of Vietnam Veterans with Spina Bifida

The Department of Veterans Affairs (VA) assumes that a biological child of a Vietnam veteran born with spina bifida developed the condition in utero due to the Agent Orange exposure of one of the parents. Therefore, it does not require evidence showing a positive link between the parent’s military service and herbicide exposure to the child’s spina bifida. The only exception to this is when the child receives a diagnosis of occult spina bifida.

Eligible children of Vietnam veterans receive healthcare benefits and vocational training. The latter consists of up to 24 months of job training, job placement assistance, and rehabilitation services. Children of Vietnam veterans must be at least 18 years old or have completed high school, whichever occurs first. Depending on circumstances, some participants in the Department of Veterans Affairs vocational training program may be eligible for an extension of up to 24 months after completing the first 24-month period.

While the VA does not require medical proof of the relationship between the parent’s Agent Orange exposure and the child’s spina bifida, it does impose other requirements to receive healthcare services and vocational training. These include:

Spina bifida is the only known birth defect associated with male Vietnam veterans of America. The VA recognizes several other negative health effects in the children of biological mothers who served in the Vietnam War or the Korean Demilitarized Zone. The health problems of children born to female Vietnam veterans do not relate to Agent Orange exposure, any other type of herbicide exposure, or dioxin exposure. The only correlation between the birth defect and the mother’s military service is that she served in Vietnam, according to VA.

Children of female U.S. military veterans born with a physical or mental deficit that doctors expect to last throughout his or her lifetime are also eligible for certain VA benefits. The list of eligible birth defects includes:

The child’s birth defect cannot be due to an inherited genetic disorder, an injury that occurred during the birth process, or another identifiable cause. Children of female Vietnam veterans must meet these qualifications to apply for VA benefits:

Even when you or your disabled adult child meet the qualifications to receive disability compensation, the Department of Veterans Affairs could still deny the request. This is often due to applicants for VA benefits not completing the requested forms correctly or failing to submit the required proof of dates of military service. The best thing you can do if you or your disabled adult child received a letter denying VA benefits is to work with the disability law firm of Hill & Ponton. We can also assist you with preparing your application for the first time.