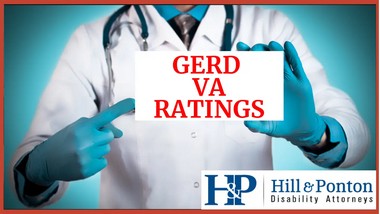 VA Disability Benefits and Ratings for GERD: What Veterans Should Know

Among gastrointestinal disorders, gastroesophageal reflux disease (GERD) is a very common condition that is associated with heartburn. In fact, according to the National Institute of Diabetes and Kidney Digestive Disease, approximately sixty million people experience heartburn at least once a month, and twenty-five million experience the symptoms daily. If you experienced GERD following military service, you may be able to seek VA benefits for your condition and get a GERD VA Rating.

This post will outline the basics of GERD, as well how former service members can obtain service-connection from the VA despite the lack of a disability rating schedule for this condition.

What Is Gastroesophageal Reflux Disease?

Gastroesophageal reflux disease, or GERD, is a condition in which gastric acid and partially digested food flow up from the stomach into the esophagus. This results in the painful sensations that are associated with heartburn. Continuous irritation of the esophageal lining poses a risk for developing more severe complications such as esophageal cancer.

Symptoms of GERD include:

How Does GERD Occur?

What happens in cases of GERD is the LES opens when it is not supposed to—namely after the enzymes and acids have started working on the contents of the stomach. When this occurs, gastric acid and partially digested food flow back up into the esophagus. The lining in the esophagus, as mentioned before, is not thick enough to withstand acid, and this causes the burning sensation in the chest and throat. This sensation is more commonly called heartburn, pyrosis, or acid reflux.

It is a well-established fact that certain medications, lifestyle choices, and non-related physical disorders can contribute to GERD. Not only do some medications weaken the LES, but some medications and outside factors can aggravate the already-irritated esophageal lining.

There are some medications that are known to weaken or relax the LES. Many of these act as muscle relaxants, and can cause the wrong muscles to relax, such as the LES. These medications include:

There are also medications that irritate the esophageal lining, such as:

There are many risk factors for heartburn and GERD. Many of them necessitate the regular consumption of medications listed above.

Certain health conditions like a hiatal hernia can also cause GERD. It’s important to always consult a doctor if you are experienced recurrent epigastric distress, discomfort in the digestive system, IBS, or other symptom combinations. Doing so is an important part in seeking VA disability GERD benefits.

Making a Disability Claim: How Do GERD VA Ratings Work?

GERD is one of those interesting and rather inexplicable exceptions to the VA rules. For example, the VA’s regulations on presumptive Persian Gulf War conditions (conditions which are automatically considered service-connected if you meet the qualifying criteria) include gastrointestinal disorders.

However, there is a caveat to this and VA Ratings for GERD.

One can argue that this does not make any sense. But while this particular regulation does make it harder to obtain service-connection for GERD, there are ways to get around this. Since there is not a specific GERD VA Disability rating system, individuals may choose to obtain Veterans disability compensation by proving direct or secondary service connection in their VA disability claim.

In order to show a direct service connection for GERD, you will need to gather medical evidence and show severe impairment of health in your medical records. If you were diagnosed with GERD while on Active Duty, and if a medical expert provides a favorable opinion that your GERD condition began during and has continued since service, you can obtain service connection on a direct basis.

Service connection can be granted on a secondary basis if a medical expert can provide a favorable opinion that one condition was developed secondarily to a condition that has already been service-connected. In this particular case, we mentioned respiratory conditions as being a risk factor for GERD. Say, for example, the VA has service-connected you for COPD. Over time, you developed GERD due to chronic irritation of the esophagus and due to the effects of the medications that help control your COPD. You can file a VA claim for GERD secondary to COPD. However, you will need a doctor or health care practitioner’s opinion that your COPD condition caused or aggravated GERD.

While the VA ratings for GERD may not mimic that of other conditions, that doesn’t mean you can’t obtain Veterans benefits for your medical condition. The Veterans disability law firm Hill & Ponton is available to help former service members obtain disability benefits from the Department of Veterans Affairs. Whether you want to discuss the schedule of ratings, service connection, or medical evidence for an appeal, be sure to call 1-888-373-9436 to speak with our knowledgeable team. You can also click here to request a case evaluation.