How the VA Rates Sleep Apnea 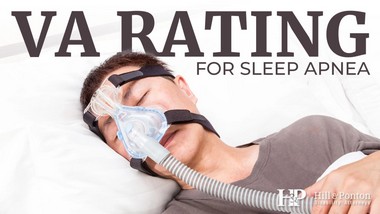 How Can You Receive VA Disability for Sleep Apnea?

Sleep apnea is a common condition that affects about 22 million people nationwide. If you are among the former military service members living with sleep apnea, you may be eligible for Veterans disability compensation. This guide will outline the basics of sleep apnea, how the VA disability rating works for this condition, and how qualifying Veterans can prove service connection.

What Is Sleep Apnea?

Sleep Apnea is a potentially serious sleep disorder in which a person’s breathing is repeatedly interrupted, or ceases, during the course of a night’s sleep. These sleep disturbances can occur from tens to hundreds of times per night. The causes of these disturbances may vary depending on which form of the condition you have: obstructive, central, or a mixed form of both.

Obstructive sleep apnea is one of the more common types of sleep apnea, which occurs when the upper airway repeatedly becomes blocked throughout the night. This blockage is caused when the back throat muscles relax, impairing the airflow. Central sleep apnea occurs when the brain either does not send signals to the muscles that control breathing or those signals are interrupted. The VA refers to mixed sleep apnea as a combination of the obstructive and central forms of the condition.

Some of the most common symptoms of sleep apnea include:

Veterans who are experiencing the above symptoms should consider seeking a diagnosis and pursuing sleep apnea disability benefits. This generally requires a sleep study. If left untreated, sleep apnea can lead to conditions like:

Since sleep apnea can correlate with conditions like heart disease and obesity, it’s important to seek treatment. Physicians will treat sleep apnea depending on the type and severity of the condition. Some individuals with breathing disorders will show improvement from lifestyle changes. However, a breathing assistance device called a cpap machine is among the most common treatments. This machine creates airway pressure to help the individual breathe throughout the night.

How Does the VA Rate Sleep Apnea?

How Can You Establish Service Connection For VA Disability?

How Does the VA Diagnose Sleep Apnea?

The VA will usually order a sleep study to be performed in order to confirm a current diagnosis of sleep apnea. As a part of the VA’s duty to assist Veterans in obtaining evidence to help prove their claim, the VA has a duty to assist Veterans in scheduling the examination for a sleep study. This study will serve as medical evidence for the Veteran’s case.

For Veterans who have already been diagnosed with sleep apnea without a sleep study by the VA, the Veteran may have to undergo a sleep study done by the VA in order to confirm the diagnosis for benefit purposes.

Is There a Connection Between PTSD & Sleep Apnea?

Research has shown that their Veterans with post-traumatic stress disorder, also known as PTSD, may be at risk for sleep apnea. There are factors that overlap in both disorders which affect and aggravate each other. Some of these factors are issues that Veterans may have experienced in active duty, such as disturbed sleep in combat, excessive sleep deprivation, fragmented sleep, hyperarousal, and chronic stress.

Although all of these symptoms contribute to the interaction between sleep apnea and PTSD, the main culprits seem to be sleep deprivation and chronic stress. Studies have shown that patients exhibiting these symptoms tend to have increased frequency and length of apneic events.

Research has also shown that as the severity of PTSD increases in a person, the chances of developing sleep apnea increases as well because of the interplay between the shared factors of the two disorders. Sleep apnea and other mental illness are also associated with each other. Click here to learn more about that topic.

The important takeaway message is that if you are a Veteran suffering from PTSD, it is important to get a screening for sleep apnea. You may be eligible for additional VA disability benefits based on that diagnosis.

What If You’re Denied for Benefits?

If your obstructive sleep apnea VA claim, or other sleep apnea claim, was originally denied, you may be able to appeal the rating and receive VA disability compensation. The law professionals at Hill & Ponton are available to help. Our disability attorneys focus on Veterans disability and social security disability law, helping your family obtain the benefits you’re entitled to. You can call our law firm at 1-888-373-9436 to discuss your VA disability claim.