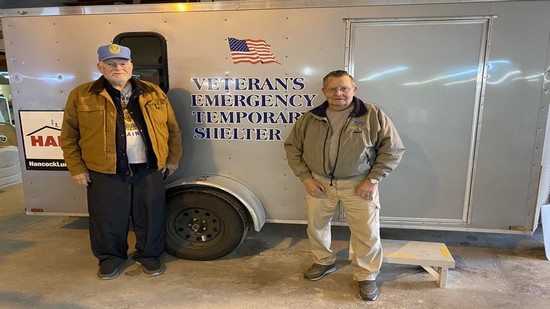 BOOTHBAY (WGME) – Edward Harmon knew there had to be a way to help homeless Veterans in Maine, so he decided to transform a cargo trailer into a temporary home.

It's a project that is just getting started.

The goal is to make the temporary space feel like home.

Edward Harmon is on a mission to make a difference in the lives of Veterans in Maine.

"There are 10-15 Veterans sleeping under bridges from here down to Portland," Harmon said.

Harmon works closely with homeless Veterans to get them into permanent housing, but due to the current system, there is a 2- to 14-day delay while a Veteran is being processed.

"They kept saying there's nothing that can be done, we have to do the paperwork," Harmon said.

And that's how the "Homeless V.E.T.S. Project" got started.

Harmon and his partner Arthur Richardson have taken a "cargo trailer" and transformed it into a home, equipped with a bed, nightstand, refrigerator, a desk, chair and heat.

Here’s a look inside the trailer. He’s working with donated materials. There’s a bed, nightstand, microwave, heat, along with a desk and 3 windows.

The goal is to start off by creating a dozen of these homes.

"When we get the 12 here, we're going to turn these sideways and have four in here, so we'll work them four at a time,” Harmon said. “We'll be able to produce one every three weeks once we get going."

Eventually, they want to scatter them across the state.

Harmon says the price per trailer is about $7,800.

But the labor is absolutely free.

They are still working on raising money for the trailers, but have the space, and are ready to build.

Sponsors are donating the materials to make trailers comfortable, and community members are willing to pitch in to help.

"It's just, it's a nice little home," Harmon said.

It’s a temporary space that Harmon hopes feels like home.

"Any individual that gives even a penny is heartfelt, because we have to help our Veterans," Harmon said.

If you would like the make a donation, checks can be sent here: