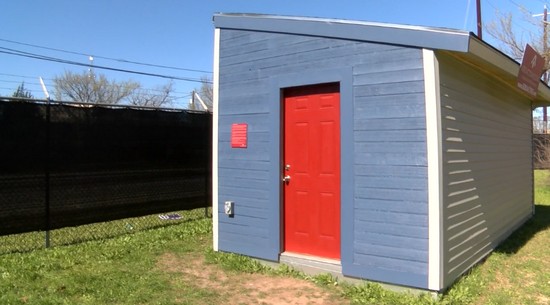 AUSTIN (Nexstar) — A company in Austin is presenting a pop-up home that can be deployed in six hours as a possible solution to Veteran homelessness in Texas.

Bush said the amount of time it takes to build the home — and the amount of space it takes up — makes it a viable solution to try to help our 2,700 homeless Veterans across the Lone Star State.

“Once we’re able to identify the Vet themselves, present this as a temporary housing solution to then take that next step toward a permanent housing solution,” Bush said.

But the structure itself is not the only part of Kiro Action’s solution.

“It has identified service vendors to help triage the Vet, and almost treat that Vet like a patient to help find that next step,” he said.

The homes would serve as a temporary solution, that would pair with case management groups in order to get the Vets back on their feet, Kiro Action founder Sam Haytham explained.

“So they can rehabilitate those homeless, whatever that issue may be, they can take them through the process, and our goal is that they graduate from the program,” Haytham said.

The homes are adjustable, Haytham said Kiro Action is willing to work with the city on how large, or how many are produced. It’s important that the structure feels like a real home.

“This is a dignified home, this is not a tent under an underpass. You can come and leave your stuff in it, you can have electricity,” Haytham said the homes can be hooked up to the city’s utility services.