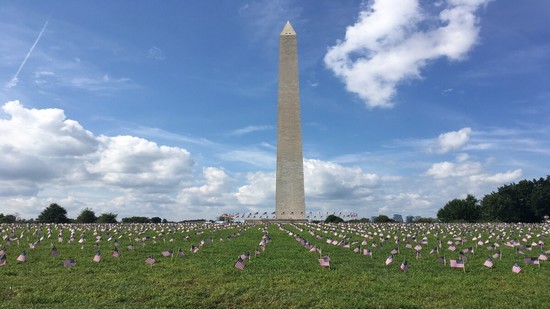 After 15 months of work, the White House’s task force on preventing Veterans suicide will unveil plans for more federal coordination with community providers on mental health outreach, promotion of “safe storage” programs for firearms owners and a public awareness campaign that mental health problems need not be fatal.

President Donald Trump called the announcement “beyond what anyone has ever done” to address the problem of Veterans suicide during a White House event on Wednesday afternoon.

“Today we’re unveiling our roadmap to empower Veterans,and end the national tragedy of suicide, a tremendous problem,” he told a crowd of supporters and Veterans advocates. “My administration is marshaling every resource to stop the crisis of Veteran suicide and protect our nation’s most treasured heroes. They’ve been through so much. And it’s such a deep seated problem.”

The President’s Roadmap to Empower Veterans and End a National Tragedy of Suicide (PREVENTS) is designed to be a comprehensive federal approach to the issue, one that senior White House officials have labled the first real push by top government leaders to address the public health threat of suicide.

But the effort has drawn criticism in recent months from some in the Veterans community for taking too long to complete and not offering enough specific actions or legislative proposals on the problem.

About 20 Veterans and active military personnel die by suicide each day, according to the latest figures from Department of Veterans Affairs researchers and state census data.

That information typically lags about two years behind current conditions, creating difficulties in gauging how effective new outreach programs are at helping Veterans. White House officials have promised new database work to improve that turn-around time as part of the new effort

The new suicide prevention roadmap provides 10 recommendations to deal with the issue, including the new public health campaign to be launched later this summer.

Administration officials said that work would echo past campaigns on issues like drunk driving, but focused on myths surrounding suicide. At least part of the messaging will include encouraging Americans to talk openly about mental health and suicidal feelings, to dispel assumptions that such conversation may endanger folks struggling with those problems.

VA and other federal agencies have also begun discussing new partnerships with local charities, academic institutions and private-sector businesses to tackle the problem. That would will include some suicide prevention training and general mental health wellness practices.

Much of the work will be broadly applicable to all Americans, not just Veterans. Suicide is among the top 10 leading causes of death in America today, according to statistics from the Centers of Disease Control and Prevention.

Among the more controversial aspects of the roadmap may be discussions related to firearm safety and other “lethal means.”

Mental health advocates for years have pushed for limiting troubled Veterans’ access to guns in an effort to eliminate the potential of impulsive and deadly decisions, but gun rights groups have pushed back on those ideas as an infringement of Veterans constitutional rights.

Senior administration officials said the roadmap does not call for any new restrictions on gun ownership or possession, but will focus on “education” regarding safe storage programs and the importance of securing any potentially lethal items from individuals predisposed to self-harm.

That work will include partnerships with Veterans service organizations, local law enforcement and sport shooting groups, in an effort to calm concerns that such discussions are geared towards safety and not confiscating weapons.

The plan also calls for VA officials to “streamline access to innovative suicide prevention programs and interventions by expanding the network of qualified healthcare providers.”

Details of that work — and whether it could run into existing fights over private-care access for Veterans health care — were not immediately available.

The roadmap was originally scheduled to be released in March after a year of work, but administration and VA officials’ focus on the ongoing coronavirus pandemic delayed the announcement by more than three months.

White House officials did not inform congressional leaders about the contents of the roadmap report until just a few hours before the president’s afternoon announcement. Administration officials said the roadmap will help guide future legislative priorities on the issue, but did not provide any immediate measures that will be pushed as part of the plan.

The PREVENTS office is planning a public technology challenge later this summer to develop “a platform that will serve as a resource of evidence-based mental health and suicide prevention solutions” and a new suicide prevention survey to gather Veterans thoughts about existing resources.

“We have much more substantial work to do to prevent Veteran suicide and ultimately help save Veterans’ lives,” he said.

Veterans experiencing a mental health emergency can contact the Veteran Crisis Line at 1-800-273-8255 and select option 1 for a VA staffer. Veterans, troops or their family members can also text 838255 or visit VeteransCrisisLine.net for assistance.