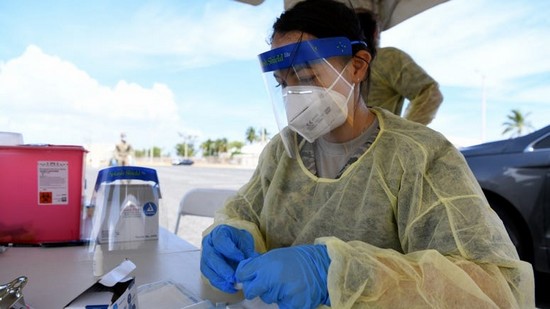 The stress, anxiety and forced isolation because of the coronavirus pandemic may have increased American's risk of suicide, including for Veterans. But that risk could continue to grow even as the pandemic begins to lessen, experts warn.

Veterans struggling financially because of the pandemic -- who lost work, took pay cuts or furloughs or who became homeless or were at risk of losing their homes -- could continue to carry those burdens, complicated further by existing health issues and an expectation their stress and other mental health concerns will disappear when the crisis ends.

Those feelings of anxiety, depression or even post-traumatic stress are normal and should be expected during a worldwide crisis, health experts emphasized during a press call hosted by the National Action Alliance for Suicide Prevention. But there's help available.

"During the actual crisis, suicides can go down," said Barbara Stanley, a New York State Psychiatric Institute researcher. "It's in the aftermath that it gets worse. We expect to see fallout in terms of possible increases in suicide as a tail going forward."

About 20 Veterans die by suicide daily, according to Department of Veterans Affairs data. While that data is usually about two years old, the rate of suicide among Vets hasn't budged much over recent years. But that means it will be difficult to tell if the pandemic had a significant effect on the suicide rate.

That's why researchers said they're sounding the alarm now, to try to get resources to Veterans hopefully in time to save lives.

One of those resources is telehealth. The VA has moved much of its mental health care online or over the phone as its hospitals and clinics shuttered or limited patients during the outbreak.

Before March of this year, about 15 percent of all VA mental health appointments were by phone or online. Now, it's more than 80 percent, according to Dr. Matthew Miller, VA director for suicide prevention.

Stanley and other experts predicted a "marked rise in telehealth and teletherapy" on the horizon for mental health specifically, and said patients have been eager for the change, though doctors and other care providers have "had to make that adjustment ... in the past, they may have never considered telehealth for suicidal clients. Now, they have been forced to make that change."

"This has been an adjustment we made to make sure Veterans have what they need," Miller said on the call. "Whether or not we keep offering these (telehealth) services, ultimately that's up to the Veterans. If a Veteran finds this is a modality that increases their access to services, then VA is all in. If their preference is traditional, face-to-face meetings, we'll keep that, too. This just provides more options for Veterans."

In March, VA held 34,000 online video appointments, up 70 percent from February. Telehealth group therapy held 2,700 meetings in March, up more than 200 percent from the previous month.

The department also recently launched a "COVID-19 chat-bot" capable of answering frequently asked questions about VA's response to the pandemic, check symptoms and direct Veterans to resources and help.

But it's not just the resources that are the key, experts said. It's Veterans knowing they're available and understanding that they can help.

"Suicide is not a forgone conclusion," said Julie Goldstein-Grumet, director at the Zero Suicide Institute, part of the Education Development Center. "There are resources available."

If you or someone you know needs help, contact the Veteran Crisis Line 24/7 at 1-800-273-8255 (select option 1 for a VA staff member). Veterans, service members or their families also can text 838255 or go to Veteranscrisisline.net.