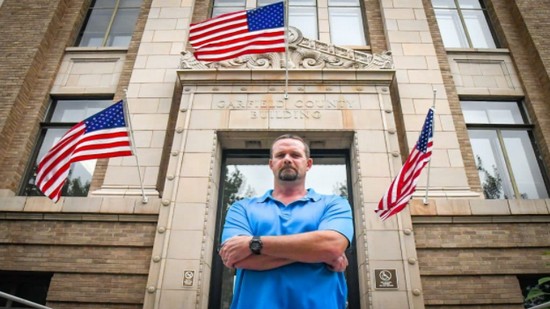 David Pruett was “hobbling around” for several years upon being discharged from the U.S. Navy in the late 1990s, before learning he could get some help for his injuries through the Veterans Administration.

Now it’s his job to help Veterans navigate that same system to ensure they get the help they deserve.

Effective last week, the longtime Rifle resident and real estate appraiser is the new appointed agent whose job it is to steer Garfield County Veterans to the various services that are available to them.

It was the former longtime Veterans Services Officer for the county, Joe Carpenter, who helped Pruett work through the process to get the help he needed.

“Today, there are a lot of young Veterans who’ve served in the last 20 years who may need those services, but aren’t really sure how to go about it,” Pruett said. “As I learned, it’s not just an old guys’ thing. Some Veterans need that assistance the day they get out.”

County commissioners last week appointed Pruett, a Navy Veteran and Rifle High School graduate, to be the new Veterans services officer (VSO) for Garfield County. He replaces outgoing VSO Lisa Reed-Scott, who had been at the post since January 2019. She resigned last month to pursue other career avenues.

Pruett, 49, was active duty as a member of the prestigious Navy SEALs (Navy Special Warfare) for almost five years after graduating from Mesa State College in Grand Junction (now Colorado Mesa University) in 1994 with a degree in criminal justice.

Injuries ended his military career prematurely, but he continued in the volunteer spirit after returning to Rifle, as a firefighter for the Rifle Fire Protection District, and with the Sunlight Mountain Resort Ski Patrol and the Garfield County Sheriff’s Office Search and Rescue.

“I’m excited to have the chance to work with Veterans here in Garfield County,” Pruett told county commissioners upon his appointment. “I’m very familiar with paperwork, working as an appraiser, and I have the paper cuts to show for it.”

Growing up in Rifle

Pruett was born in Denver, but his parents, Mike and Irene Pruett, moved to Rifle when he was young. He has two siblings, sister Kimberly, who lives in Grand Junction, and brother Mark from Denver.

While attending Mesa, he met his wife, Annick Pruett, who is well-known in the Rifle area as community relations director for Grand River Health. David Pruett took over the family appraising business after working with his mother for several years. He and Annick have two grown children, daughter Makenna and son Dalton.

“David is a former student of mine and former student body president of Rifle High School, so this makes me very happy,” County Commissioner Mike Samson, a longtime former RHS teacher, said of Pruett’s appointment to the VSO position.

Pruett said he had always wanted to go into special operations, and the opportunity presented itself after he graduated from Mesa State.

The stretch of time during which he served did not involve any major conflicts, though he was part of various operations in North Africa and the Middle East where the SEALs were tasked with stopping ships that were breaking embargoes.

“I was going to make it a career, but injuries I sustained in training pushed me out,” Pruett said.

Back home in western Colorado, when not working, Pruett said he still enjoys his weekends in the outdoors as much as possible.

“When I left the service, they asked me why I wanted to come back here … ‘there’s nothing there,'” he recalled.

“I told them that, if I’m at home on a weekend, it’s either because I’m sick or it’s a bad weekend,” Pruett said. “Otherwise, I’m going to be outside doing something. That was especially true when we had kids.”

Pruett said he had thought about applying for the VSO position in the past, including when Carpenter retired in 2016. But he and Annick were still busy home-schooling their children at the time, so he decided to wait.

When the opportunity became available again this spring, Pruett decided it was the right time in his life.

His appraiser office in Rifle was a popular spot for local Veterans to visit, and he would always enjoy talking to them about life and service.

“I’d chat with them and learn so much from each of them about their service, both tactically and historically, and I also learned a lot about their frustrations and struggles to connect with needed services,” he said.

Pruett said his primary focus will be on communicating with area Veterans who are in need of the various services that are available to them.

“I want them to know that I’m on their side,” he said. “I’ll do my best to take care of them and their families, and for anyone who may be struggling with depression or suicidal thoughts, remember that we’re all in this together, so let’s stick together.”

Another concern among Veterans advocates is for those who are experiencing homelessness, whether by circumstance or by choice.

“As I’ve seen it, there are several different reasons to be homeless,” Pruett said. “For some of them, that’s what they choose, having come from military combat and what they’ve seen. That’s how it impacted them.

“Some have mental disabilities and can’t hold a job or keep a home. But there are programs available for them, if they need them. We just need to find them, and get them in contact with the right people.”

A difficulty for many Veterans is that there’s no special privilege in civilian life based on rank, as they had become used to in the military.

“But you’re still a Veteran,” Pruett said. “You volunteered or were drafted, but No. 1, you served. And when you get out, you might not even be looking for those benefits. But if you need it, it’s my job to try to help them find that benefit.”

Pruett is now in the equivalent of basic training for Veterans services officers.

Every county in Colorado has at least one VSO. Shortly after his appointment last week, he was on a videoconference call with several of those officers learning about the latest programs that are available.

A particular focus right now is on suicide prevention, he said, as the suicide rate among Veterans remains a major concern.

“We just want people to know that we’re here, and can find them the help that they need,” Pruett said.

Pruett will be working out of the Veterans Services offices in both Glenwood Springs, 803 Colorado Ave., and Rifle, at 195 W. 14th Street, Building A.