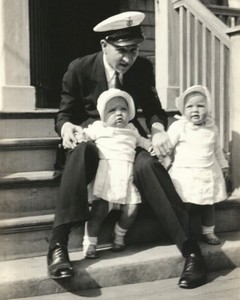 "It's not about finding ships," Tim Taylor said. "The importance of our work is to connect families and bring some type of closure and peace even generations later."

Since she was a young girl, Helen Cashell Baldwin had been haunted by the mystery of what happened to the doomed Navy submarine USS R-12.

Baldwin's father, Fredrick Edward Cashell, and 41 other men died in June 1943 when the submarine sank off the Florida Keys during a World War II training exercise. The R-12 could not be found, and as Baldwin went from an 8-year-old girl to a 75-year-old woman, she all but lost hope that it would ever be discovered.

But in 2011, a relative forwarded her a website claiming that the submarine had been found. Ocean explorer Tim Taylor, who set up the site, wanted to get in touch with relatives of the victims.

Within months of speaking with Taylor, Baldwin and her two siblings boarded a boat and headed out into the Atlantic with Taylor and his wife and fellow explorer, Christine Dennison. About 11 miles off Key West, Taylor took out his computer and pulled up drone images of the long-lost vessel — a sight that Baldwin said took her breath away.

Then they held a memorial service for her father and the other men who died aboard the R-12, tossing 42 roses into the water directly above where the submarine lay at the bottom of the ocean.

"That was a completion of 70 years of waiting," said Baldwin, now 86, weeping as she spoke. "It was a life-changing experience."

Taylor's team has found a total of seven Navy submarines — five of which disappeared during World War II — bringing a measure of closure to hundreds of family members like Helen Baldwin.

Taylor was honored this week with the Navy's highest civilian award, the Navy Distinguished Public Service Award. His team is credited with having discovered the final resting places of 288 men, all locked inside what had become sunken tombs.

"Every one of these lost submarines, along with our other ships, to the U.S. Navy is a hallowed site," Sam Cox, a retired rear admiral who is director of Naval History and Heritage Command, said at the ceremony at the Navy Yard in Washington, D.C.

"It's a last resting place of sailors who made the ultimate sacrifice in the service of our country, and in effect, it's the Arlington National Cemetery for the Navy," he said.

In an interview just before the ceremony, Taylor said he is motivated by a desire to bring comfort and closure to family members denied the chance to fully mourn their loved ones.

"It's not about finding wrecks. It's not about finding ships," Taylor said. "The loss of someone even 78 years ago, and not knowing where they are, leaves a hole in families. The importance of our work is to connect families and bring some type of closure and peace even generations later."

The son of a Navy Veteran who fought in World War II, Taylor has spent his life exploring the ocean's uncharted waters.

He began his career focused on scientific explorations, leading to his discovery of numerous reefs around the world. He participated in shark research projects and underwater archaeological missions, and he hosted several National Geographic expeditions.

"I knew I had the technology and the skills and the background to find these things," Taylor said.

He began researching lost submarines. Then he started plotting them out using the same navigational programs he turned to for other exploration projects.

Technological breakthroughs changed the way exploration could be done. Gone were the days of lowering hundreds of feet of cable and dragging imaging devices through the waters.

Now he had access to autonomous robots that use sonar to detect objects in the dark depths of the seas and the oceans.

"These autonomous vehicles, we just throw them in the water," said Taylor, who said they have been programmed for the task.

Taylor likened the robots to the rovers used to explore Mars.

A needle in a haystack

Built in 1918, the R-12 was the oldest submarine used in World War II. It was recommissioned as a training vessel in 1940.

On June 12, 1943, the R-12 headed out from Key West to practice launching torpedoes. But as the boat prepared to dive, the forward battery compartment began to flood, and the sub sank in 15 seconds, according to a Navy Court of Inquiry.

The hunt for the R-12 came at a unique time in Taylor's life. He was set to be married two months later to Dennison, a polar ocean explorer who became an integral part of the expedition.

They put up $750,000 of their own money to fund the search. And in October 2010, Taylor ventured out into the waters off Key West and detected a large object about 600 feet below the surface. He knew almost immediately that he had discovered the R-12.

"It's like looking for a needle in a haystack, and when you realize you have found it, the magnitude of the moment hits home," Taylor said.

As Dennison put it: "It wasn't just locating that submarine, but it was locating a crew of heroes that had been in their final resting place."

Taylor and Dennison returned to the site a year later with a new underwater vehicle equipped with a high-definition camera. They returned to land with high-resolution images of the R-12.

The discovery became a turning point for the intrepid newlyweds. They launched the Lost 52 Project dedicated to locating the 52 U.S. submarines that disappeared during World War II.

"It was not like any other discovery I had ever made," Taylor said of finding the R-12. "There were 42 souls on board that vessel. And submarines contain and keep water out. They keep bodies and souls in. And it became a responsibility for us to connect those lost sailors with their families."

They set out to raise money to expand their operations. And in the last 10 years, Taylor's team has found six more submarines off Hawaii, Alaska, Panama, the Philippines and Japan.

Taylor and Dennison continue to search for more World War II-era Navy vessels that never returned to shore. They believe it is essential for private explorers — and the philanthropists who fund them — to take up the challenge of scouring the seas and oceans for lost military vessels.

"This is a daunting task," Taylor said after he accepted his award from the Navy. "We strive to set an example that others will follow."