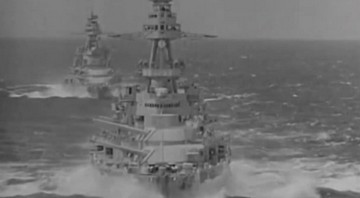 NEW MEXICO (KRQE) – Tucked away among the ballfields and the bike paths at Albuquerque’s Bullhead Park is an obscure memorial marked by a pair of tarnished plaques. While the park is a place to relax and have fun, it has a solemn purpose too. Bullhead Park is named for a U.S. submarine sunk in the final days of World War II. The Park is dedicated to the memory of the 84 sailors who perished aboard that vessel.

Fifty-two U.S. Naval submarines were lost fighting the Pacific war. Among the thousands of Sailors who perished were 24 New Mexicans. They came from Springer, Cuba, Albuquerque, Mora, Los Lunas, Gallup. All disappeared. We can only surmise their fates. Their bodies never recovered. There were no funerals. Family members never got to say goodbye. We know their names, but we will never know their stories of bravery and heroism.

They were young men like J. W. Saint from Carlsbad. “He died on October 3, 1944. It was shortly before his twenty-sixth birthday,” his grandson Phoenix Attorney Robert Mitchell says. Mitchell has compiled a chronicle of his grandfather’s short life. “He was only 25 when he died, so the sacrifice that he and many others like him made is just astounding,” Mitchell said.

Born in Carlsbad, James William Saint was the oldest of six children. While working in Mountainair, J.W. enlisted in the Navy and was assigned to submarine duty aboard the USS Seawolf. While on patrol off the coast of Japan in 1944, the USS Seawolf disappeared, the victim of friendly fire. A U.S. destroyer mistook the vessel for an enemy sub and sunk it. All 100 sailors on board perished. J. W. Saint was officially declared dead one year later. He was survived by his wife Marie and two children. The remains of the USS Seawolf have not been found.

“He received the Bronze Star, he received the Navy Commendation for Outstanding Heroism and of course, the Purple Heart. He was a hero in every sort of the way. I think he was a very brave man,” J. W. Saint’s grandson Robert Mitchell says.

“They all paid the ultimate sacrifice,” says Naval Historian Charles Hinman. Hinman works at a Hawaii submarine museum near Pearl Harbor and maintains a website, “On Eternal Patrol,” to honor the men who lost their lives in submarine service.

“It’s a dangerous job, and often when the submarine goes down, with very few exceptions, everyone goes with it,” Hinman says. “You’re not just fighting the enemy. You’re also fighting the ocean depths,” Charles Hinman told KRQE News 13.

Neal Johnson grew up in Tucumcari. Fresh out of high school, he joined the Navy and served as a Machinist’s Mate Third Class onboard the USS S-28. In July 1944, during a training exercise off the coast of Hawaii, the submarine along with its 49-man crew disappeared. Three months later, the Navy confirmed Neal Johnson had died. He was just a kid, only 21 years old.

Four years ago, explorers discovered the USS S-28 wreckage off the coast of Oahu. The site remains undisturbed as a military war grave.

Albuquerque’s Robert Greenwell majored in Civil Engineering at the University of New Mexico. After enlisting in the Navy, he reached the rank of Lieutenant aboard an Attack Class Submarine named the USS Trigger. While on patrol off the coast of Japan in 1945, the USS Trigger was attacked by enemy forces and disappeared. The entire 89-man crew perished. Lt. Greenwell’s disappearance was reported in the Albuquerque Journal. He was just 23. Robert Greenwell was survived by his wife, Montelle. To date, remains of the USS Trigger have not been located.

George Wester was from Romeroville, a small village south of Las Vegas, New Mexico. He enlisted in the Navy in 1942 and served as a Seaman First Class onboard the USS S-44 Submarine. While on patrol in the Kuriles north of Japan, the USS S-44 was attacked by an enemy destroyer. George Wester, along with 55 shipmates, were killed. George was only 19. A marble marker at the Santa Fe National Cemetery honors his military service.

At Central New Mexico’s Stanley High School, J.T. Northam was a noted football and basketball star. He graduated from Stanley High in 1941. Cattle rancher Sam King was a classmate. J.T. enlisted in the Navy and served as an Electrician’s Mate Third Class on a submarine called the USS Grayback. In 1944, while on patrol south of Okinawa, the USS Grayback came under air attack and disappeared. All 80 sailors aboard were killed. Back home, at the Edgewood Cemetery, a stone monument honors the memory of J.T. Northam. He was 22.

In 2019, the USS Grayback was discovered by divers in 1,400 feet of water off the coast of Japan.

“It’s so inspirational for the time we live in today,” J. W. Saint’s grandson Robert Mitchell says. “We don’t always see that type of heroism that I think that whole generation demonstrated,” Mitchell said.

KRQE News 13 would like to acknowledge the following individuals who assisted in the preparation of this report: Albuquerque Genealogist Wynne Wood, David and Marty King (Stanley, NM), Charles Hinman (On Eternal Patrol), Robert Mitchell (Phoenix).