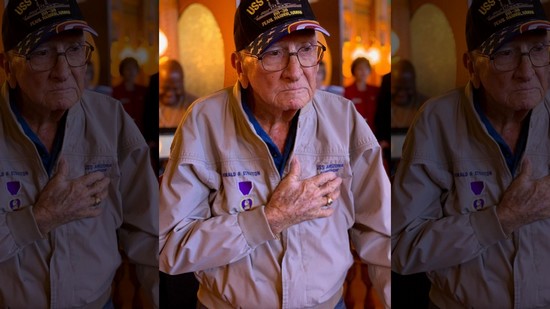 Donald Stratton, one of the last USS Arizona survivors from Pearl Harbor who fought for the recognition of one of his heroic shipmates, died Saturday night in his sleep, his granddaughter told Fox News.

Stratton died of natural causes in Colorado Springs, Colo., his family said. He was 97.

The Navy Veteran said it wasn't until 2001, during a reunion of Pearl Harbor survivors, that he discovered the identity of the U.S. service member who saved his life and the lives of at least five other sailors: Chief Petty Officer Joe George, who died in 1996.

Stratton and Lauren Bruner, another Arizona survivor, lobbied hard for George to be recognized. Both traveled to Washington, D.C., in 2017 to meet President Trump in the White House and then-Defense Secretary Jim Mattis at the Pentagon.

Stratton said he and others trapped aboard the sinking Arizona had struggled mightily to escape the carnage, which killed 1,177 of his shipmates, after Japanese planes struck the Arizona several times on Dec. 7, 1941. "We got hit with the big bomb and that exploded like a million pounds of ammunition. The fireball went about 60, 70 feet in the air."

He said George threw them a lifeline from his own ship, which was moored next to the Arizona.

"We proceeded to go hand over hand across the line about 70 feet" off the burning warship, Stratton said, adding that the toughest part was reaching the middle of the sagging line stretched across two ships, and climbing up to the other ship.

Still, George "kept saying, 'Come on sailor! You can make it,'" Stratton recalled. The attack left Stratton with burns over 60 percent of his body, costing him his fingerprints and leaving permanent scars.

Recollections from George himself ultimately emerged; he spoke to the University of North Texas in 1978 for an oral history documenting the attack. There were "people over on the Arizona that were trying to get off, and there was fire all around," he said. "I threw a line over."

Later in 2017, the Navy finally awarded George a posthumous Bronze Star with valor, an award many of his supporters said was long overdue.

"I was aboard the USS Arizona on the morning of December 7, 1941. The courage I saw in our men was astonishing," Stratton wrote in his 2016 book, "All the Gallant Men." "Acts of individual heroism could be witnessed everywhere you looked. Men being strafed as they brought boxes of ammo up ladders to the antiaircraft guns. Other men carrying their wounded buddies to safety, trying desperately to stanch their bleeding. Still others in small boats, navigating through the fiery sea, pulling oil-soaked sailors from the water. Many putting out fires on board their ships. All the while these men were dodging enemy bullets that were cutting everything around them to shreds, including their fellow sailors."

Stratton's granddaughter, Nikki, told Fox News he died "peacefully" with family by his side, including his wife of nearly 70 years, Velma.