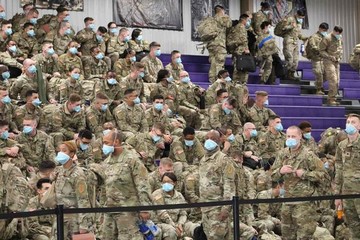 The way that Douglas Sims spoke to his wife was unusual.

It was 2011 and the two were sitting at a table as their daughter practiced with her swim team. They had a rare year "off" from Army life for Sims, then a lieutenant colonel, to participate in a fellowship at Massachusetts Institute of Technology.

He was six months removed from a deployment to Afghanistan where he commanded the 1st Squadron, of the 2nd Cavalry Regiment. He had just two days between leaving command in Germany and arriving in a "completely different world" for his fellowship.

"Are you OK?" his wife, Fay asked. The way that he spoke sounded off, she told him.

But the question stayed with him and over the remaining time in his fellowship, reshaped his own understanding of post-traumatic stress disorder, behavioral health and the importance of taking time to build mental strength, just as he has taken time each morning of his Army career to build physical strength.

Sims, now a major general, can draw a line from his wife's question to the mental fitness policies that he enforced later during his brigade command, and through to the current policies that he enacted last year after taking command of the 1st Infantry Division and Fort Riley, Kan.

Soon after hearing his wife's concern, Sims said he took his post-deployment health assessment and read each question more carefully. He realized many applied to his own emotions. With the advice of a fellow officer who had attended counseling, Sims made the decision to go himself.

"I found it to be extraordinarily helpful," he said.

Shortly after arriving at Fort Riley in August 2020, Sims announced a division policy that every soldier must attend at least one counseling session a year -- no matter their rank or position. It's part of a program known on base as "Victory Wellness," which also requires soldiers forgo physical training every other Tuesday to participate in mental fitness training.

Across the military, officials have created programs and initiatives to tackle mental health issues and help tackle the suicide crisis in the force. Every three months, the Defense Department releases a report on prevention efforts and the number of service members who have died by suicide.

Deaths in the Army had increased, from 146 suicides in 2019 to 175 in 2020. Last year, service leaders identified suicide as one of the three corrosive behaviors that they aim to eradicate from the force along with sexual harassment and assault and extremism.

While the counseling sessions do aim to help the 10% of soldiers who are facing problems in life, the deeper goal is to reach the 90% who are not.

"It's to help them to thrive even more, with a thought that we all end up in that 10% at some point in our lives," Sims said. "We have marital problems, our parents get older, our children are having problems, we're physically injured, whatever that is, we're going to end up in that 10% and we hope that we're able to come out of that."

Eventually, he'd like soldiers to feel attending counseling is as normal as a trip to the dentist, which is also mandatory.

The pilot counseling program for Victory Wellness began in December and started with all battalion commands and above, so leaders had first-hand experience. Then in January, the effort began in earnest. More than 6,500 soldiers had been through counseling as of August. In total, about 15,000 soldiers are assigned to the Kansas base.

The past 10 years of Sims' career had been building toward this policy, but his timing lined up with the Army turning more attention toward soldier well-being. He arrived at Fort Riley about the time that Army Forces Command began implementing Foundational Readiness Days, one day of the month dedicated to building relationships in units.

III Corps, the Fort Hood, Texas-based headquarters that is part of Fort Riley's chain of command, had begun the similar People First campaign to build trust among soldiers and leaders after a particularly difficult year on base.

Spc. Vanessa Guillen was killed at Fort Hood by a fellow soldier in an arms room. Her family said she faced sexual harassment on base, but was too afraid to report it. Her death and those allegations led to two Army-initiated investigations that found significant problems with the culture on the base and a distrust and misunderstanding of programs related to sexual assault and harassment prevention and behavioral health.

III Corps commander Lt. Gen. Pat White has implemented all four divisions in his command conduct People First training in a way that matches its own culture. In July, White held a meeting where Sims, along with commanders of the 1st Armored Division at Fort Bliss, Texas, the 1st Cavalry Division at Fort Hood, and the 4th Infantry Division at Fort Carson, Colo., were able to hear the successes and challenges of each division's separate initiatives.

From that meeting, White said, he will see what's working at each of the bases that he oversees and develop policies this fall that could spread across the corps.

"This is going to become annual, so we'll continue to learn and improve up until such point in time that it's kind of normal," White said.

Consistency has been a major factor in earning buy-in from soldiers, said Lt. Col. Paul Godson and Command Sgt. Maj. Joseph Hardy, the command team of the 3rd Battalion, 66th Armored Regiment, which is part of the 1st Infantry Division's 1st Brigade Combat Team. Whether at home or in the field, the efforts have to be deliberate, and they have to be genuine, Godson said.

While he said he can't directly link the outcomes, soldiers are showing improvement in their group and individual skills. This year's gunnery performances improved over last year and about 25% of soldiers in the squadron's infantry company earn their Expert Infantryman Badge, which is up from previous years.

"During our winter gunnery we faced negative 20-degree wind chills. It was rough, but we had zero cold weather injuries," Godson said. "I attributed a lot of that to taking care of each other and having those discussions and knowing each other that much better."

They soon will deploy to Europe as part of their brigade's nine-month rotation in Operation Atlantic Resolve and expectations of Victory Wellness remain in place, including the counseling sessions.

"That's how we demonstrate to our soldiers that we're taking this seriously. The commander and I were some of the first ones to get over there and get checked on and being able to just sit there with a counselor, and just kind of talk about whatever it is that's on your mind is good," Hardy said. "It's liberating to be able to just get some stuff off your chest with somebody who's not going to judge you."

Anecdotally, Hardy said he knew of at least 10 soldiers from their squadron who have chosen to continue seeing a counselor based on the outcome of their required visit.

To make certain the program doesn't strain resources or limit the amount of counseling appointments available for those seeking support outside of Victory Wellness, up to 10 of the base's military and family life counselors rotate through the program on 60- and 90-day rotations. They see three soldiers in morning and three in the afternoon in one-hour blocks. They do not use behavioral health specialists or chaplains, so they remain free for in-the-moment crises, which still exist, Sims said.

The average session runs between 45 and 60 minutes, he said. There are no medical records kept or notes taken.

Sims has three main goals in sending every single soldier and leader to counseling: to make people stronger, to expose everyone to the experience, and to remove the stigma associated with being seen or known as attending counseling.

Dr. Amy Adler, acting director of the Research Transition Office and senior consultant for the Center for Military Psychiatry and Neuroscience, both part of the Walter Reed Army Institute of Research, is studying the Victory Wellness program and the impact the mandatory counseling is having on soldiers as well as how leader participation impacts a soldier's perception of the program.

Using online surveys, the research team studies soldiers' opinions of the program and if attending a counseling session helps to reduce any preconceptions that they might have about seeking mental health support.

While study is ongoing, Adler has already seen when a soldier reports that their leadership attends and encourages participation in Victory Wellness, the soldier also reports finding the activities more helpful.

While the study isn't looking at why this happens, Adler said it relates back to the general understanding of the influence leaders have over subordinates.

"They lead by example," she said. "They establish priorities, and they communicate explicitly and implicitly what matters. I think all subordinates at all levels are intuitively responsive to what the leader is doing."

The study is the second time that Adler has worked with Sims on his efforts to improve mental fitness of troops. As brigade commander of the 2nd Cavalry Regiment, Sims first implemented the idea of setting aside one day of physical training every two weeks to focus on the mind and the heart.

On those days, units sometimes have difficult conversations, learn from guest speakers, and sometimes they do teamwork and community service, such as a clean-up project for the local zoo or a soccer game with kids in an underserved community. Some days include exercises that put resiliency skills and knowledge to the test.

Command Sgt. Maj. Donald Durgin served under Sims as he laid out initial concepts of Victory Wellness with the 2nd Cavalry, and now as the senior enlisted leader of the 1st Battalion, 5th Field Artillery Regiment, which has deployed as part of 1st Brigade's rotation in Europe. Durgin said by watching the program evolve to what it is today, he's learned it's about more than leaders just using the designated time to engage with soldiers. It's about presence and genuine interaction.

Durgin is now stationed in Poland and he said a walk throughout the base will show that leaders are present and open to engage soldiers and the community in conversation. And sometimes, it's as simple as a game of table tennis, he said.

"That could be just walking into the gym or the [recreation center], and just saying, ‘Hey, what are you doing? Let's play a game,'" he said. "It starts with trash talking and everything else, and then you can see the manifestation of tranquility of calmness of wanting to be here not because they have to be, but because they want to."

Now with about a year of Victory Wellness complete in the battalion, Durgin said they've seen improved retention rates and he "100% believes" in the program's ability to create a unit where soldiers feel valued and important to the work. In a deployed environment, he said it's crucial that soldiers feel they are each other's "family away from your family."

Through it all, Sims said he's been proud to see the program has not hampered the division's operational readiness.

"It's two sides of the same coin," he said. "We can think that we're attaining high operational readiness, but if we do it on the backs of our soldiers, then, in fact, it's going to be hollow."