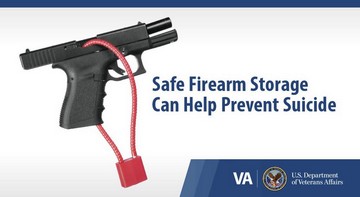 Veterans Affairs officials want to talk about your guns.

Staff working on suicide prevention are planning to increase their focus on the importance of lethal means safety as part of their suicide prevention campaign. On Wednesday, VA officials said that will include more training for staff and more public service announcements for Veterans on best practices for gun storage and mental health help.

“We are not gearing any campaign or messaging towards restriction,” Dr. Matthew Miller, executive director of VA’s Suicide Prevention Program, told members of the House Veterans’ Affairs Committee on Wednesday. “We are gearing our messaging and campaign towards safety, time and space between a person, a firearm and ammunition.

Miller’s comments came two weeks after VA officials released their annual report on Veteran suicide rates, showing a decline in 2019 (the latest year for which data was available). The 7 percent decrease put Veterans’ suicides at their lowest rate since 2007.

But the figures still translate into about 17 Veteran deaths a day by suicide across America. Of those, roughly 70 percent are the result of firearms use.

Public health officials for years have pushed for increased focus on gun ownership and safety among Veterans as a way to reduce suicide among Veterans, noting that former military members are more likley to own and use the weapons.

And VA has run multiple public service messages and safety training programs on the issue in recent years. But much of that work has been publicly downplayed or curbed as the topic has frequently run into political opposition from gun rights activists and conservative lawmakers, who view the efforts as an attempt to infringe on individuals’ Second Amendment rights.

In testimony Wednesday, Miller and other VA officials said they are cognizant of those concerns, but also convinced that the topic must be broached more widely to save Veterans’ lives.

“In fiscal 2022 we’ll be moving forward with that … addressing lethal means safety specifically for Veterans, for families and loved ones and community members, and for health care systems,” he said. " We’re also working from an interagency perspective within the government, where lethal means safety is a primary goal for interagency collaboration and coordination.”

In the last month, department officials have released a series of new ads — both online and on through media networks — informing Veterans that “a simple lock puts space between a thought and a trigger.”

The PREVENTS report, compiled and approved by President Donald Trump’s administration, noted that “time and space can create an opportunity for a change of heart or for someone to intervene” in cases of Veterans’ emotional distress.

“In addition, if one means for attempting suicide is not available, most people do not substitute a different method,” the report said.

The announcement of a new gun safety push by VA drew only mild pushback at Wednesday’s hearing.

Rep. Matt Rosendale, R-Mont., warned that “mandated removal of Veterans’ firearms [in cases of mental health problems] would be very counterproductive and completely unacceptable to many members of this committee.” But he also said he thought the approach of VA thus far is “headed in the right direction” in his view.

“This is a real problem,” he said. “The amount of times that Veterans are using firearms to take their own lives … if we can get time between them and their firearms, then that’s going to be a good thing.”

The latest VA report on Veterans suicide is available on the department’s web site.

Veterans experiencing a mental health emergency can contact the Veteran Crisis Line at 1-800-273-8255 and select option 1 for a VA staffer. Veterans, troops or their family members can also text 838255 or visit VeteransCrisisLine.net for assistance.