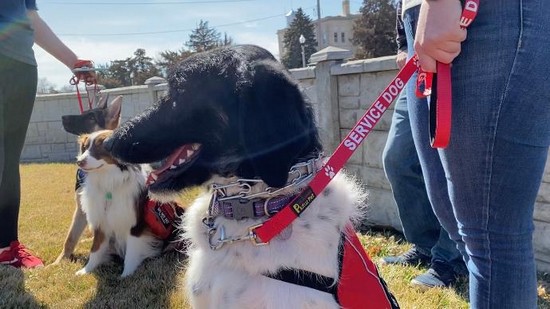 NESS CITY, Kan. (KWCH) A Kansas non-profit is trying to reduce Veteran suicides by giving them a life-changing gift.

K9's For Heroes gives service dogs to Veterans who struggle with PTSD. On Saturday, the organization gifted it's second dog to a Veteran in Ness City.

"She's going to be good for me and I can't wait to see how we do together and how the quality of life is going to improve for me," said Annie Henson.

Henson joined the Army in 2011 and now struggles with PTSD.

"I was active duty at the end of last month. I don't do well in crowd situation or people in my personal space so I tend to not go out in public," said Henson.

"Just seeing this dog will have an effect on her and help her to be able to go out in public. Help ease her anxiety, and deal with her new reality," said April Cunningham.

Hope is the second service dog K9's For Heroes has given to a Veteran, but they have eight more training to become service dogs. Their goal is to give 20 service dogs to Kansas Veterans with PTSD this year.

"We'd like to see if we can change the suicide rates in Kansas specifically," said Cunningham.

The organization's top priority is Veterans in Kansas, but eventually would like to grow to help Veterans with PTSD in other states as well.