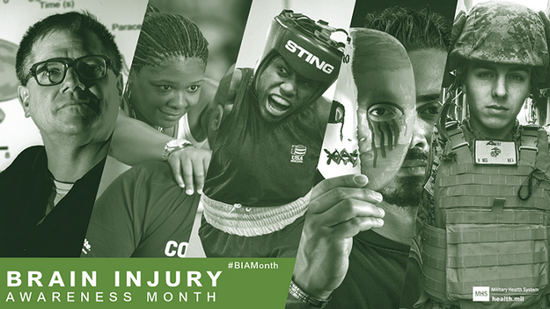 Traumatic brain injury remains a key health concern for the military. TBI ranges in severity from mild, moderate, severe and penetrating. Most traumatic brain injuries in the military are mild, otherwise known as concussion and most service members return to duty after recovering from their injuries, according to the Defense Health Agency’s Defense and Veterans Brain Injury Center. Together with other elements of the Military Health System, DVBIC will offer resources and tools to educate the military community about TBI during Brain Injury Awareness Month this March.

A division of the Defense Health Agency Research and Development Directorate, DVBIC is the DoD’s TBI center of excellence. The center leverages state-of-the-science research to inform clinical recommendations and educate providers and patients and their caregivers.

More than 400,000 service members have been diagnosed with a first time TBI since 2000, according to figures published by DVBIC, which is charged with tracking TBI data in the military. Service members who may have been involved in a potentially concussive event need to see a medical provider as soon as possible since research shows getting treatment early helps to maximize outcomes. Most service members who sustain a mild TBI return to full duty within seven to 10 days through the “progressive return to activity” process--a standardized approach informed by the latest evidence-based research.

“This yearly observance (of Brain Injury Awareness Month) showcases the wide variety of MHS and DVBIC resources tailored to the needs of patients, providers, and caregivers,” said DVBIC Division Chief Navy Captain Scott Pyne. “These tools facilitate return to duty for active service members, and return to all aspects of civilian life for Veterans. We welcome the opportunity afforded by Brain Injury Awareness Month to highlight these endeavors.”

This year, DVBIC is highlighting how the military community – service members and Veterans, health care providers, researchers, educators, and families – works together to address TBI in the military with the theme, “TBI: Me, You & Us.”

Service members and Veterans have to be prepared to prevent a TBI while training or deployed, and need to educate themselves about TBI symptoms so they will know when to seek care. During March, DVBIC along with other organizations in the Military Health System, will share key resources to enable service members to help themselves and their fellow service members and Veterans. “A Head for the Future,” a DVBIC TBI awareness initiative, will feature videos highlighting “TBI Champions.” The videos share real stories of service members, Veterans, family members, providers, and advocates in the military TBI community. They reveal people coping successfully with TBI, as well as the people who support them.

DVBIC is the leading DoD authority on the development of clinical recommendations, guidelines and tools that inform health care providers who treat service members and Veterans on the latest scientific evidence regarding prevention, diagnosis, treatment and rehabilitation of traumatic brain injuries. DVBIC’s revised screening tool, the Military Acute Concussion Evaluation 2 or MACE 2, can be used by all trained medical staff, not just corpsmen or medics. This revised tool has modernized the screening and evaluation of mild TBI by adding new assessment areas such as assessing eye movements and balance after a possible mTBI. Clinical guidelines regarding the “progressive return to activity” process are helping improve care of warfighters dealing with TBIs they experience at home and abroad. DVBIC’s medical surveillance and clinical education efforts help ensure providers are armed with the cutting-edge tools and resources to ensure that service members are ready when called to duty.

TBI recovery, however, relies on an entire community of caregivers and family members that are full partners in the healing process. DVBIC features a wide array of resources for caregivers who play a critical role in supporting the health and well-being of individuals with TBI, recognizing the emotional, physical and financial toll that is so often associated with caregiving.